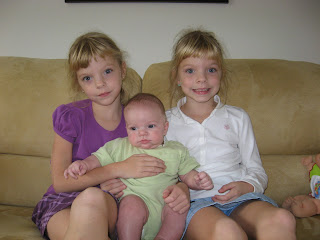 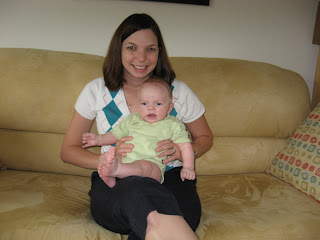 Sorry to say, but this weekend felt like a major bust.

1. Friday night - I did massive amounts of laundry to ensure that what I wanted us to wear for family picture day on Saturday was all clean, laid out and wrinkle free.

2. Saturday a.m. - The girls raced up the stairs, squealing with excitement, to their room because I told them that the remote to their t.v. was in the top drawer of the dresser. (They had supposedly lost it weeks ago.) They sounded like a herd of elephants. Then, there was a massive boom followed by silence. Chris and I took off, full speed. Once we hit the foyer there was a second massive boom...and still no sound from the girls. As we took the stairs two at a time I hollered up to them. Only Casey responded. My heart filled with dread...I just knew that the t.v. had landed onto of Chandler, and I prepared myself for the worst. Casey was holding up the tall dresser with her arms, standing in a pile of movies and clothes that had spilled out of it. Chan was in the middle of the pile with a completely dazed look on her face. To make a long story short (or at least shorter), they were both ok. Casey has a bruise on her arm and Chan has a knot on her head (or blow hole as she likes to call it). Casey had tried to climb up the drawers, even though she can reach the top when she is on her tip toes. The dresser start to lean, the t.v. fell off the top and the cord ripped out of the back of it. It is now officially a dead soldier.

3. Saturday afternoon - After cleaning up the damage from the t.v. incident, we began to prepare for the family pictures. Mom and Tom arrived. The girls showered, dressed, had their blow dried and fixed. Quinn had an afternoon bath. Chris and I both got ready. We headed into Athens. We began the picture taking festivities (with our favorite photographer and close friend, Frankie). About 5 minutes into it, Chan had to go to the bathroom. She came back, took another picture, and had to go again. And again. And again. She kept holding herself and saying that it was hurting to pee. Big sigh. So, the big family photo shoot ended much earlier than I had planned. We went to the Med First - me, Chan and Chris, while Mom and Tom went to our house with Casey and Quinn. We spent the next two hours there, while our child refused to pee in a cup, and then proceeded to tell us that she felt much better once we were in the car. In the end, she peed 3 drops, they looked at them under the microscope and found nothing. She has also been fine since.

4. Saturday night - We were supposed to go to Chili's in Athens after the photo shoot, but with all of the issues, dinner ended up being at 8pm and was take out Beed O'Brady's. My parents stayed for the first half of the UGA game, then left, and we were asleep within minutes.

5. Sunday a.m. - Homecoming at church. It is difficult to get everyone ready and out the door.

6. Sunday afternoon - Homework, and Quinn - off schedule and not wanting to nap. :(

But, the girls are about to go to bed and Quinn is almost ready for his night time bottle. So, I guess we have survived. I am slightly more tired now than I was Friday night.
Posted by Angie at 6:48 PM

oh lordy... and you're in grad school TOO? i don't know how you do it. i'll have to remember this weekend summary the next time i feel busy, right? ha ha ha