I want to remember this...

I really cannot tell you how I wish I had started blogging earlier.  I wrote short stories from when the girls were little, but I wish I had blogged or had written more consistently.  I feel like there are so many things that I swore I would remember that I have long since forgotten...and I hate that.

So here's something I don't want to forget. My sweet son, age 4.  He goes through spells of wanting to talk on the phone and for the past couple of days he has been a talking machine.  Last night he went on and on and on with my mother...talking her ear off...and then it was his bedtime and so my mom offered to talk to him again tonight...to make the hanging up easier.  He agreed and promised to make a list (omg, how cute is that???) of all the things that he wanted to talk to her about on the phone. 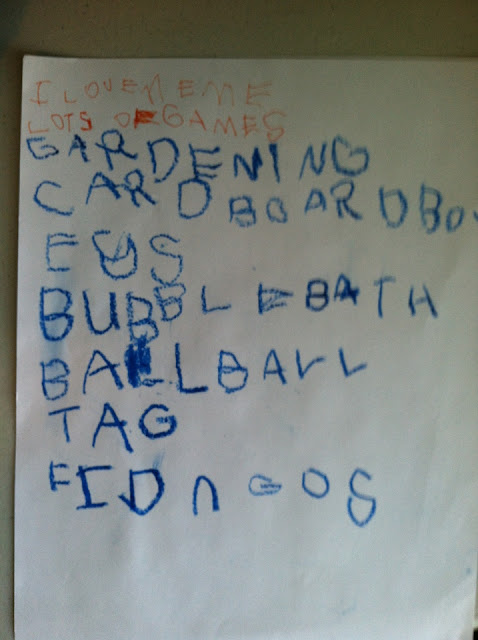 He was going to lead with...
1.  I love Meme.
...because clearly that is the best way to start when you have rest of the list to go...
2.  Can he buy lots of games for her phone, including candy crush and chess?  (he calls it chest)
3.  Gardening - he just wants to plant some flowers
4.  Cardboard Boxes - this one may have been my favorite...as he was talking to her he told her that he wanted to make a house out of cardboard boxes and that he was going to draw a picture of people of the box with a line through them so that everyone would know that the cardboard box was "no grown ups allowed"
5.  bubble baths - he wants to swim in Meme's bathtub with bubbles
6.  he also wants to play with balls - he had to write it twice because he messed up the L in the first ball
7. He wants to play tag outside.
8.  He also wants to play hide n go seek.

He went on to tell her that he wanted Phineas and Ferb macaroni and cheese and could they put flowers on the table because that makes things polite and pretty.

Big sigh.  I love that boy.

That is an impressive list! And impressive writing by a four year old. :)

WHY does Quinn persist in making me wish I had kids? When I KNOW BETTER!! ;)

I really liked it especially written there "CARDBOARD BOX". When I was child, cardboard boxes were my favourite toys. I have written on these boxes many times. For more on Cardboard boxes- http://smurfitkappadirect.ie/boxes.html