Our church part I

This week was one of those weeks that I just wasn't prepared for.  And, sadly, there wasn't anything that I could have done to prepare for it.

Even though days have passed, typing that sentence isn't any easier.

I think my parents did a great job of raising me with faith.  They raised me with a belief in God and to have compassion for others and to be tolerant and kind and accepting.  I know that I got these qualities from both my mother and father even though I wasn't raised in a church.  I never really had a church home.  There were places that I visited.  Youth groups that I played softball with and went on vacations with...but I was never a member anywhere.

I have never read all of the Bible.  It was fairly recently that I figured out that there were two Josephs...you know, Joseph and Mary and then Joseph and the Amazing Technicolor Dreamcoat (Chris hates it when I call him that, but that's how I keep them straight).  I didn't know they were two separate people.

When Chris and I were engaged the ladies of his church wanted to throw us a wedding shower and I declined.  I didn't understand.  I had only met them maybe once or twice, why would they want to do that?  Truly, I just couldn't comprehend it.

But Chris had grown up in his church.  His mother had started attending as a teenager.  His parents were married there and these sweet ladies had known Chris all his life.  They had helped raise him and shape him into the man he became.

But I didn't understand that then.

We attended with the girls irregularly. On the big holidays - Christmas and Easter - and a Sunday here and there.  Mainly because I like putting them in their smocked dresses and braiding their hair.

And then the sleepless nights began.  The nights when Casey couldn't go to sleep because she worried.  She worried that we were going to die and that she would never see us again.  And my sweet child had no idea, couldn't understand, the concept of Heaven, because she had never been to Sunday School. We had never talked about it.  And in that moment, Chris and I knew that we needed to make some changes.  If for nothing else, so that our girl could get some rest.

But this thing happened - I made friends, and Chris joined committees and taught Sunday School, I donated jewelry for silent auctions and volunteered at the soup kitchen and our children learned about God and Jesus and Heaven and the two Josephs.

For so many reasons, I began struggling with Church when I started my new job last year and I just couldn't go.  I would cry on the way into town.  And I stopped going, even while Chris continued to drive in and take our kids (to Sunday School and to acolyte and to, as Quinn calls it, "the place where we sing to God.")

I am, what you might call, not a very good church member.

But Tuesday morning when I checked my email and my eyes scanned a message from Pastor Lisa grieving over the loss of our historic sanctuary, I sank.  Chris and I did our best to hold it together that morning.  Our children were starting their first day of state testing and we knew that a church fire was not the way to start it.

I talked to my Mom on my ride into Athens.  I sobbed for that building that meant so much to my in-laws, to my husband, to my children and to myself.

I stopped by the church on my way to school.  The firemen were still there in their trucks out front.  And I snapped this picture and I laid my head on the steering wheel and cried.  I turned down the street next to the church and fell to pieces when I saw the destroyed sanctuary through the busted out windows.  The roof collapsed into the space that my children acolyte in.  The space where my girls stand over the giant floor vents in the summer to let the air conditioning poof out their skirts.  The space where my husband ran as a toddler and walked as a man and a husband and a father. The space wasn't there anymore.  It was gone. 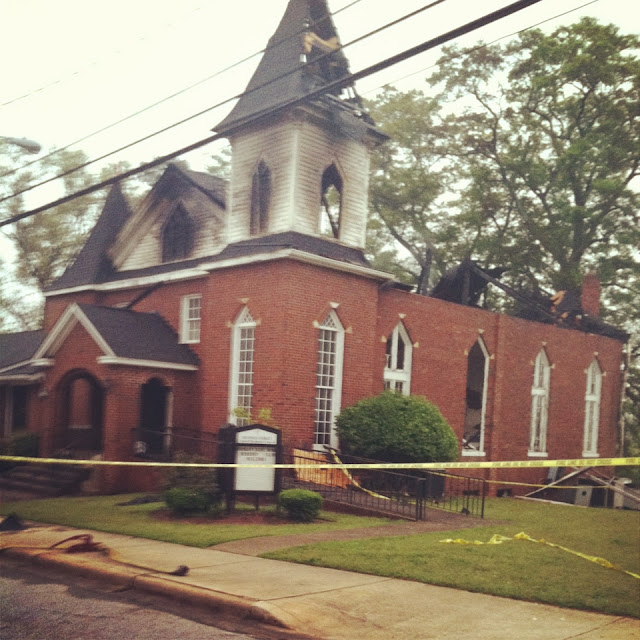 I stumbled upon this picture in the Athens Banner Herald that afternoon... 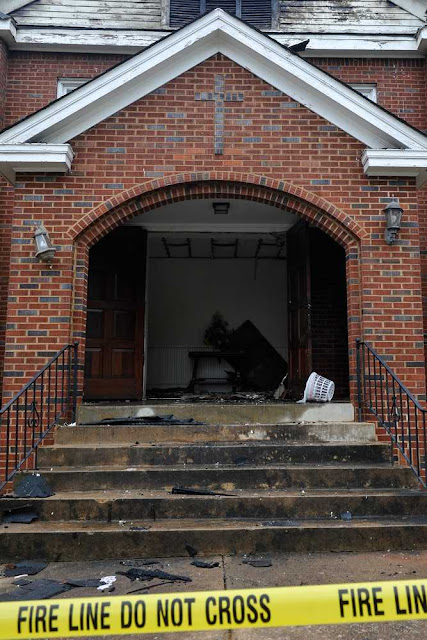 and all I could think of was this... 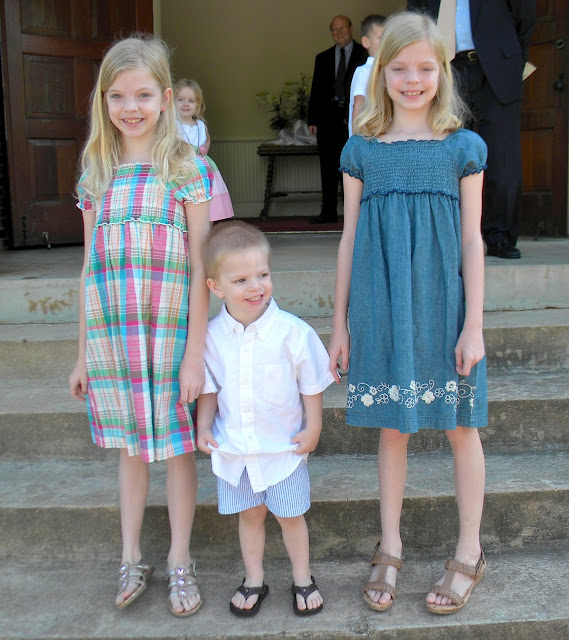 ...and of the countless other pictures that have been taken on those steps...in that sanctuary...at that alter...and guess what?  Yep. I cried some more.

And now, I need to take a break from writing this...look for the conclusion over the weekend.  I have to go to bed.  Friday can't get here fast enough.
Posted by Angie P at 11:07 PM

Oh friend, I am so sorry.

They will rebuild and there will be new memories and it is going to be great.

Angie, your writing is the most eloquent and poignant of any I've read about our shared loss. Thank you.

What a beautiful southern church. Reminds me of my childhood. I am so sorry for your loss-it must have been horribly shocking.

And your girls aren't the only ones to stand over those vents and let their skirts poof out. I did it as an acolyte as well. There are so many stories. So many memories. We will get through this though. And if you are bad at Church, then so am I. But we have to let that be what it is and move on. At least that's what I'm telling myself. I didn't even think I had a right to go and see the church this week because I haven't been in so long. I felt like a hypocrite. All we can do, though, is comfort each other and know that from ashes comes new life. I like to think of the phoenix. That will be us. Love you, sister.

That's why you looked somber on Tuesday morning when you entered the media center! It is so hard to come to work when there is personal stuff going on in our lives. Sometimes it helps being there to keep our minds off of the personal stuff.