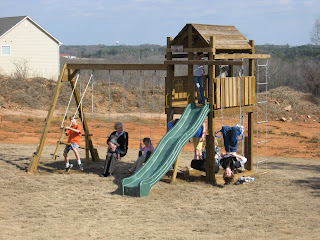 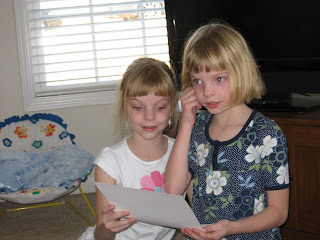 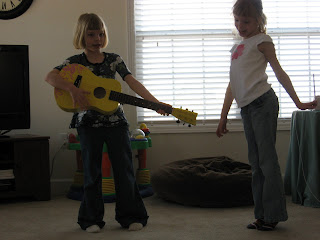 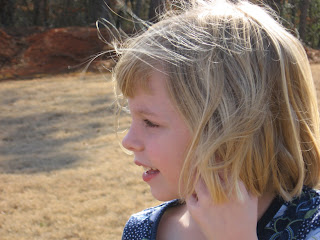 So, I have been a bad blogger! The girls turned 7 and we had a party and I didn't even take the time to post about it. :( Chris and I had decided not to do a "big" party for them this year - even though they so desperately wanted to invite all of their friends to Jump Zone - because we decided months and months ago to plan a surprise trip to Disney. Needless to say, I still felt terrible every time I had to tell them that we were just having a small party and not the really big one that they really wanted.

So, the day of the party came...While Chris took all of the kids out to breakfast with his dad, I lovingly wrapped (in a diaper box with Christmas paper) the Mickey and Goofy stuffed animals that we bought for them along with a letter to them telling them that in less than 2 weeks we would be heading to the Magic Kingdom. We ended up with quite a number for just a "small" party - Chris's family and my family along with the Wylies, Aunt Molly and Drew and Christy Beth. It was a perfect day - 75 and sunny - and the kids got to run around in the yard (barefoot! something I wasn't aware of until too late) and play on the swing set.

Then came the moment of the big reveal...first the shock of the diaper box..."No, no, just open it" then they couldn't get it open, so they ripped open the bottom so everything came spilling out and they missed the letter. The look of horror on their faces when they thought we had given them stuffed animals when they asked for a BIG party and a laptop...especially after I made it very clear to them pre-party that they were going to LOVE everything they got, even if they really didn't...oh, the looks on their faces...trying so hard to force a smile. Then they found the letter and we had them read it (together) aloud to everyone. They couldn't believe it! Seriously. They asked us about 20 times that day, "Are you really taking us to Disney World?"

So, today is the day! We are leaving after school for the 8 hour drive to Orlando. We're staying at the Disney resort and we are going to ride all the rides and see all the shows and meet all the characters. I ended up home today because for the past couple of days I've had a little sore throat and little bit of congestion and then woke up hardly able to swallow and feeling like someone had shoved a brick into my head through my nose while I was sleeping. I actually got up, drove the thirty minutes to work and then came back home and went to the doctor. I was terrified that I had strep, but (thank God!) no. Just sinus issues, swollen tonsils and a sore throat. Luckily, the doctor understood my predicament and actually prescribed something for me. And what a blessing it has been to be at home - finishing up the packing, taking a nap and catching up on all the blogs I have failed to post!