The House in the cul-de-sac 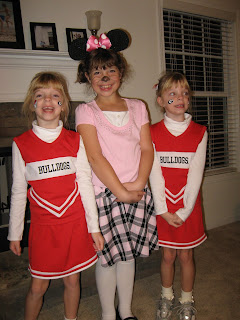 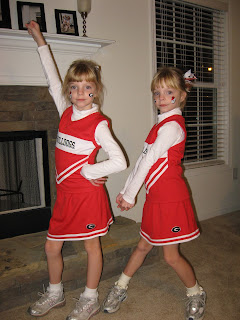 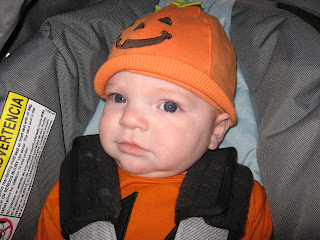 We invited our friend Sally Ann to come over Friday night with her daughter Savannah to go trick-or-treating with us. It started out to be the typical Halloween night. The girls were having a great time. Sally Ann and I were having a great time chatting while walking behind the girls. Chris was home with Quinn answering the door. Everything was going quite well. Until we got to the house in the cul-de-sac. They had a fog machine. And lights. And the spooky music CD. People hanging in the windows. The graveyard in the front yard with bones coming up out of the grass and skulls. Sally Ann and I could see people hiding behind the bushes in the front of the house. Sally Ann and I had already discussed how both of us were major sissies...hate scary movies and haunted houses...I have issues with masks and such...So, it took us about ten minutes just to cross the street going towards the house...making statements like, "You don't have to go over there, girls." "It is just pretend. It is just pretend. It is just pretend." At one point, as Sally Ann and I were going to stand on the sidewalk and send the girls down the driveway by themselves, Savannah turned around and said, "Um, you're the Moms. Aren't you coming with us?" So we clutched onto each other and slowly began making our way...behind the girls, of course. The whole time we were out there debating, the people could hear us and at one point someone called out "Do not be scared." I took this as a good sign. Wrong. As we got closer, a man dressed in a suit, hunched over with a cane and a full head mask with long straggly gray hair and a skeleton face, came out from behind the bushes. The girls took of running and screaming for their lives. Sally Ann and I took off with them. It took several more normal houses for them to even get back into the swing of things. There was crying. And I warned all the other parents of small children to avoid the cul-de-sac. :)
Posted by Angie at 10:44 PM