Whew! Christmas is over! 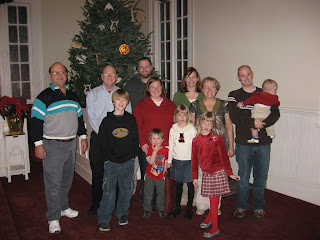 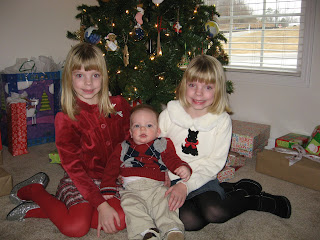 Well, Christmas is over and the teething has begun! Seriously. He's been Mr. Drooly boy for months now, but he woke up with erupted teeth this morning...both bottom ones. Hopefully it won't be too very terrible. :)

We spent Christmas Eve with Chris's family - at his parents' house and then going to church. All of the children were well behaved, so that was a bonus. They were also very gracious in the gift receiving department...it may have been my talk with them in the van on the way over there - you will like what you get (no matter what it is) and you will say thank you and if I hear one "aw, shucks!" I will take you outside and aw shuck you. That may have had something to do with it.

The night was somewhat of a nightmare though - Quinn woke up at at 3:30 (kicking, laughing and ready to start his day, so I turned him over, stuck in the pacie and rubbed his back), then Casey woke up SCREAMING!! with a nightmare (the preview for Coraline did it - she was dreaming that I had button eyes), so I laid with her and rubbed her back, only to then realize that she had a fever, so I was searching for medicine in the kitchen at 4:30am. When I came back up with medicine and a spoon she said "Has Santa been here?" and I said " I don't know Honey, I haven't been downstairs." She replied with, "Well then where did you get that spoon?" (I did not think that "out of my ass" was an appropriate response, but at 4:30 in the morning that is what I wanted to say. So I told her that yes, I went into the kitchen, but I didn't even look in the living room.) I was back in bed just in time for Quinn to wake up at 5am for a bottle. Fabulous.

The girls were apparently good this year. Santa brought them each an American Girl bed, a clothes closet for the dolls, an American girl doll vanity, and two outfits for each. They also got electronic drums, a guitar, a project runway designer set and a fur real friends teacup poodle.

My mom, stepdad and brother Matt came over for the rest of the day. My parents spent the night with us before going to the airport this morning to pick up my aunt. We really had a nice day and it was good to stay home.
Posted by Angie at 4:15 PM