Snow 09 kind of snuck up on us. Sure, we had heard that we might have some snow on Sunday, but we've heard that God only knows how many times and had it not be true. So, Chris took Casey to church with him, I stayed home with sick Chandler and RSV boy Quinn. There was lunch at the fellowship hall afterwards, and the snow started falling before Chris got home from Athens. Chan and I sat by the window watching the beautiful flakes drifting down from the sky. Quinn slept through it. Chris called to let us know that he was on his way home around 1. It took him about an hour to make the 25 mile drive. Even though Chandler had a terrible cough, we felt like we could not deprive her the experience of playing in REAL snow. The girls have never seen snow like this before. He bundled them up and sent them out. I made hot chocolate and we prayed that the power wouldn't go out. Chris got the call around 6pm that Jackson Co was having a snow day on Monday, but I did not receive a call from my school system. Bottom line, we had 5 inches of snow at our house and 20 miles away at my school there was nothing. So, Chris had to shovel the driveway and I had to brave the icy roads to get to school (late) Monday morning. I had about 15 mini heart attacks on the way - I couldn't tell what was ice and what was just shiny road. :) The same thing happened on Tuesday - Chris and the kids stayed home while I made the trek to the land of no snow. 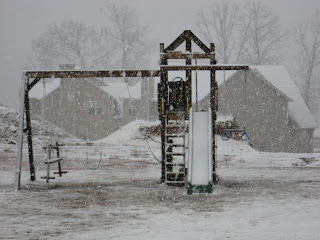 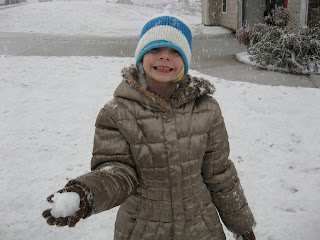 Chan - preparing for a snowball battle. 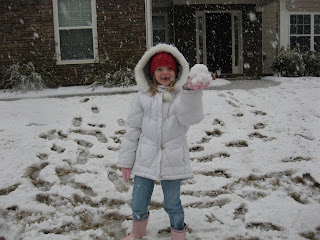 In addition to the snowballs, the girls also built snow ladies. Casey named hers Nina and was upset to watch her melt away. 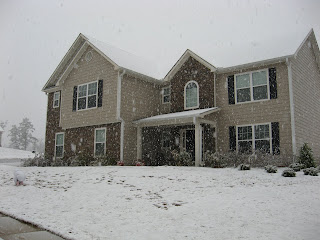 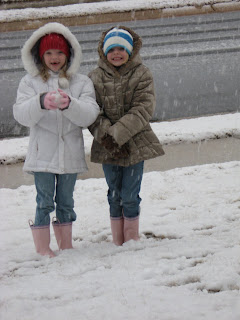 Yes, they are wearing rainboots! And yes, we did sled down the hill in the backyard on cookie sheets.
Posted by Angie at 8:58 PM