On Friday, since Chris was home and Q was at the sitter's, we decided to have a family day and took the girls to the Yellow River Game Ranch in Lilburn. The girls had a GREAT time! I must say, all in all, in was a great trip...if you leave out the moments that I had of freaking out when we were suddenly swarmed by animals. At one point, we were surrounded by about 6 deer. Um, yeah, no thanks. We continued on the trail and in front of the pens with sheep on one side and goats on the other there were about 30 bird creatures (hen, roosters and pigeons) walking with us. Again, not one of my finer moments of the trip. Chris also made friends with some squirrels and chipmunks and they proceeded to follow us for some time. Great. 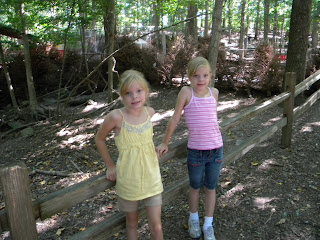 Chandler and Casey after spending an hour on the trail. 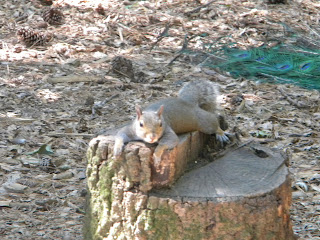 I must say, I did love this little guy. He was running crazy through the woods and Chris was trying to take a picture of a peacock. He must have noticed that he would be in the way of the picture, so he flattened himself on the stump and just laid there. How cute is he??? 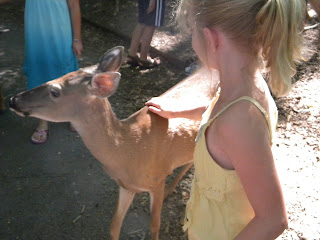 Chan petting a deer. (like you couldn't figure that one out for yourself!) 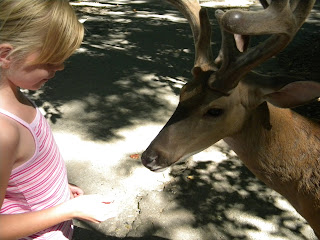 Casey feeding the deer a cracker.

After the YRGR, we went to The Avenue at Webb Gin. I must say, this whole area has changed so much from when I grew up there. Amazing, really. We ate lunch out and did a little shopping. The girls love the store Justice so we spent quite a bit of time in there. It was like a flashback to 1984. If Cyndi Lauper would have worn it, then it was in that store. Chandler was desperate for a t-shirt that had sleeve/glove things with it that the thumb went through but the rest of the fingers were cut out. But, it was $15 and none of us were willing to part with that much money. So, we compromised and went up to Claire's to see if they had any sans the t-shirt. On the way up there, Chris laid some ground rules.

Score! They each got a pair of gloves. Although, Chan picked black lace ones that are supposed to slouch a bit and she is not ok with that, so she has had several meltdowns since because they won't stay up...even after I taped them to her arms.
Posted by Angie at 10:16 PM