I see things that make me laugh all.the.time...especially when I am driving.  But typically I don't get to take a picture of them because, well, I'm driving.  But twice last week, I came upon a red light with the funny thing staring me in the face.  I had no choice.  I had to take the pictures. 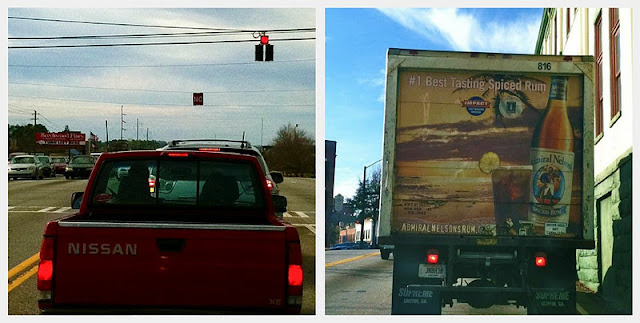 1.  Can you make out that sign in the air?  Far above the red truck?  It's across the intersection and it just says, "NO."  No explanation needed.  You think you're going to drive in that lane?  The answer is no.  The sign says so.

2.  And the back of this truck gave me a good chuckle.  It is for Admiral Nelson's Spiced Rum.  And all I could think was, "Humph, I wonder if he was on the same ship with Captain Morgan?"  Because, now, I've heard of Captain Morgan's Spiced Rum...never heard of Admiral Nelson's though.  Apparently it's the #1 Best Tasting Spiced Rum...according to the back of the truck.
Posted by Angie at 6:00 AM