I feel like I have some catching up to do....

Last Thursday, I took the kids to see the author of the Pete the Cat books (if you have small children, you MUST get these books...so delightful and the kids LOVE them!), Eric Litwin at the Jefferson Civic Center.  We had a great time...so wonderful to run into so many friends there!

{Quinn and Mackenzie...and his silly faces...}

At one point, Eric Litwin asked for a volunteer and Q's hand shot into the air.  I'm not sure what he thought he would do, but being bounced around probably wasn't it....

I have honestly been hesitant to share pics from Q's birthday.  We just had a few friends over for lunch and turns hitting the pinata.  The pinata was the only thing that Q wanted for his birthday party.  I kept thinking I should do a theme, but then when we went to pick things out for plates and goodie bags and such it became clear to me that the theme was simply "Whatever Quinn Wanted."  He has never had a real birthday party before...lunch with Chris's family after church and a poolside cake at my parents' house...so, really, I let him pick whatever he wanted and just stopped worrying about what other people would think.

We had Spiderman plates + table cloth, a mish-mash of all things that Q deemed fun for the goodie bags (angry bird tattoos, bouncy balls, dinosaur stickers, noise makers, candy, glow sticks),  + a Spongebob cake.  And he loved it. 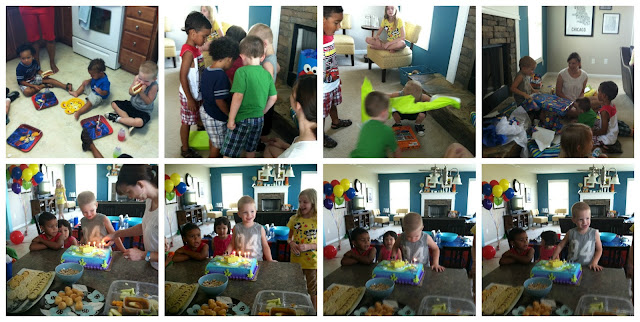 I loved that when Mrs. Spry (his pre-school teacher) sat on the kitchen floor to feed the littlest one, all of the boys decided that they needed to sit on the floor with her.  I loved that when he opened his presents, all of the kids had to gather round to see {upclose} what the gifts were.  I love that Quinn loves to have people sing to him.  I love that my boy had the best birthday ever...even after he saw that the neighbors were having a party with a giant bounce house set up in their back yard.

Tuesday was his actual birthday and we spent a good portion of the day at Sandy Creek in the lake and building sand castles.  We had a picnic lunch and played on the play ground.  Then Quinn and I went to the pet store and got a fish tank and fish...his pick...the 20 cent goldfish. 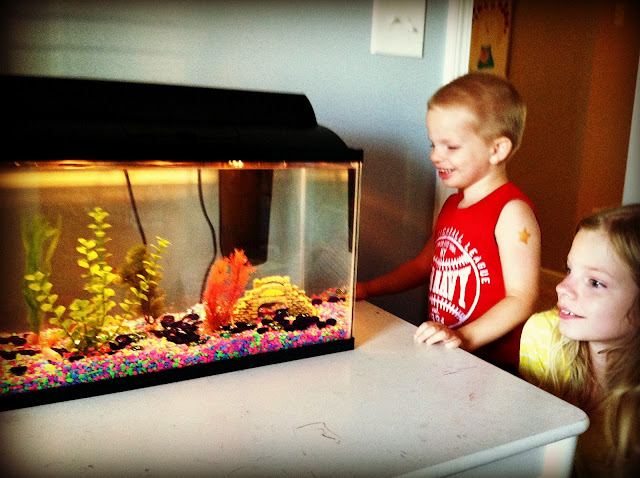 Like those neon rocks?  Yep, he picked those out himself too!

On Wednesday Quinn had his check up and shots.  And because he was so good, he got to pick a couple little frogs for in his tank.  Heaven for this boy!

Troy would have picked the exact same rocks.

ALSO, my earrings are fabulous, thank you!

What a special boy! Easy to please!

I think we probably have a bunch of rocks if you need them for your tank. :) We are tank addicts in our house and have had various sizes of tanks and fish so if you need supplies, just ask. :) Janie's party was a mish mash too - we called it "Elmo Gabba Gabba." :)