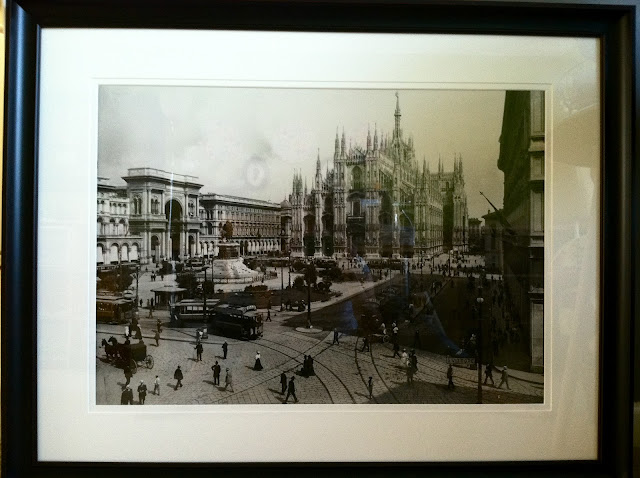 My dad's parents were from Italy.  My grandfather moved to America before WWII, got a job in the stockyards in Chicago, bought a house, saved money and eventually went back to Italy to find a wife.  My grandmother was almost twenty years younger than my grandfather.  She agreed to be his wife, to love and take care of him, to have children for him and to become American.

She took that last part very seriously.  My family was Italian, no doubt, but we were also American.  They traveled back to Italy often and she took with her pictures of all her American possessions - cars, boats, toaster ovens, air hockey tables...  While they were there, they did things like install phones in the homes of their relatives, help with apple picking, buy washing machines.


I had long dreamed of going to visit Italy with my grandmother.  Her whole family still lived there - in a small area northeast of Milan.  That dream ended when she passed away my junior year in high school.  But she left a small inheritance for me.  Not much, but enough for airfare to Italy.

So that's what I did.  The week after I graduated from high school, I boarded a plane by myself and flew to Milan.  Her nephew picked me up from the airport and I began my stay with my Italian family.  I didn't speak the language.  I didn't know the customs.  I didn't know these people.

There were times where I was overwhelmed and just wanted to go home.  But I couldn't do that.  I didn't want to hurt anyone's feelings.  I had to do this - for my grandmother.

I drank a lot of homemade wine and was introduced to, I think, everyone my grandparents ever knew.

While I was in Milan, we visited a lot of tourist attractions, including Duomo, the cathedral in Milan.  It was one of the my gorgeous things I had ever seen.  I climbed all the way to the top, marveling over the statues carved into the building, the golden Madonna at the top.

The building to the left of it, at the time, was a shopping area and in one little shop I found this print - a huge black and white photograph of Duomo from the early 1900's.

I brought it home with me and hung it in my dorm room in college with ticky tacky pressed to the cinderblock walls.  Then I tacked it up in my first apartment.  I eventually put it in a plastic poster frame and hung it in the living room of my first home.

I just had it professionally framed.  The ticky tacky marks and holes in the corners are covered.  It is matted and covered in UV glass.

It looks like something a grown up would have.

Not something an 18 year old, fresh out of high school, would buy on a whim in Milan.  But every time I look at it, that's what I feel like, that same 18 year old.
Posted by Angie at 6:00 AM

That's an awesome story, I love that print.