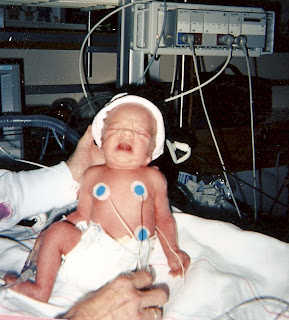 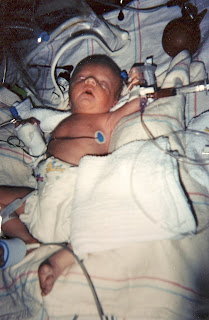 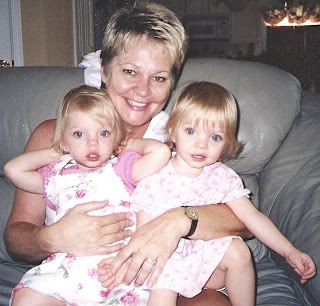 Casey (left) and Chandler (right) with Meme - they are about the same age in this picture as Q is now. Amazing how much my children look like each other, isn't it? 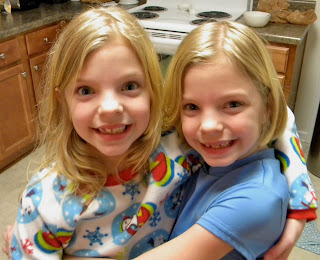 Like I said in the previous post, I was put on bed rest at 26 weeks. It was not complete bed rest - I was allowed a few short outings each week...like to the doctor's office or the hospital for my birthing classes. But my aunt and uncle were coming in town to see me for my birthday and I wanted my house to look nice, so I did a little light vacuuming Friday evening. I had done extra resting all week and I felt fine. So, Saturday morning, my aunt and uncle arrived, said the house looked wonderful, we bundled up about 8 pillows and headed out for an early lunch at Zim's. I sat with my feet propped up on the bench across from me. Then we went to the movies to see A Beautiful Mind - again - I laid back and propped my feet up on the pillows. We went home and I took a nap and then we went to Applebee's for dinner. I had been stuck in the house for months. I had acid reflux. I did not own a pair of socks that would fit and my XXXL overalls were suctioned on to my evergrowing belly. At this point in my pregnancy I was gaining almost 1/2 lb a day. I had already gained 75lbs and was tipping the scales at 200. At my doctor's appointment earlier in the week he told me that he thought I could go full term with them. I just wanted a day of normal. Or at least somewhat normal. I had laid in bed and cross stitched for over 40 hours that week. That was not normal. Later that night - after my aunt and uncle had traveled back to their hotel almost an hour away near my mom's house - I was on the phone with my mother, watching the opening ceremonies for the Winter Olympics when I noticed that Chandler would not stop moving. I thought she was going to break a rib. Then I decided I needed to eat some apple pie. And I passed the bathroom on the way to get my apple pie. So I figured I might as well go since I was in the neighborhood. And then there was blood. A lot of blood. Frantic phone call, rushing to the hospital, and the decision for an emergency c-section. My mom and aunt didn't even make it there by the time I was taken to the operating room. And then they were here - Casey - 4lbs 10 oz, and Chandler - 4lbs 7 oz, each 17 inches long, and 7 weeks early. They were born in the middle of the night and rushed to the NICU. They spent almost 4 weeks there. The longest, hardest 4 weeks of my life. And in the minutes that they were born, they became the center of my world.

And now it is 8 years later. They are so smart and funny, beautiful and kind. I can't wait to see what the next 8 years are going to be like. I love you, sweet girls, I love you.
Posted by Angie at 2:09 PM

I've been vacuuming all night and I get nothing! What gives???