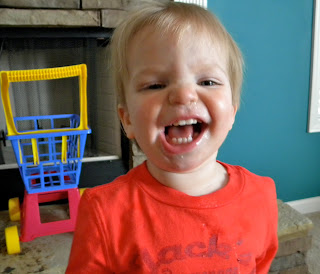 One snotty little boy. He was in the middle of trying to put the shopping cart in the fireplace. Just for fun. 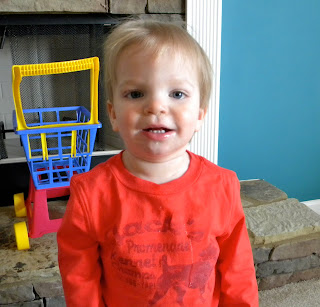 I am at home today with Q. We paid a visit to the pediatrician this morning (you know, the one that once told me - referring to the girls - "Why, I think they might be the worst patients I've ever seen.") and he has ear infections - both ears - and they looked bad. On our way to the pharmacy, I called my mother-in-law to let her know what was going on. These are some of the things that I told her...

Quinn was an angel at the doctor's. He didn't cry. He walked everywhere by himself. He let the nurse and the doctor do whatever they wanted to him - listened to his chest, looked in both ears, then he opened his mouth and let them look at his new teeth and down his throat (using a tongue depressor even) . After all of that the doctor asked if I could turn him around so she could listen on his back. Absolutely, not a problem! And it wasn't because he is an angel at the doctor's office. I love taking him there. I would rather take him than his 8 year old sisters because he (at 19 months) is so much better behaved there then they are. And at the end of the visit he waved good bye to everyone and tried to blow a kiss to Althea at the front desk.

After my glowing review of our visit, my mother-in-law told me that I was never allowed to speak ill of Q again. I will try. I make no promises, but I will try.
Posted by Angie at 12:30 PM