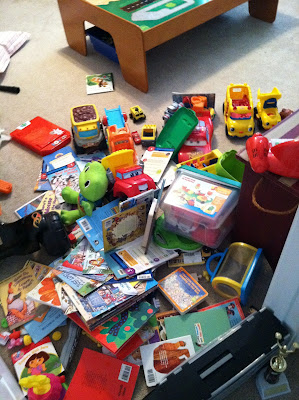 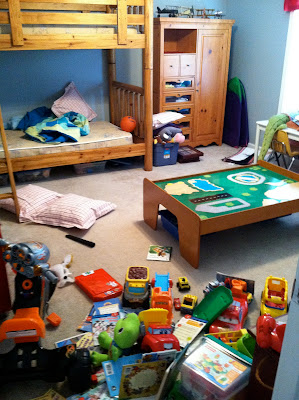 Now, you might be asking why there is a big pile of stuff right in the doorway.  Yes, that was Quinn's idea of helping to move from his old bedroom into his new bedroom.  One.  Thing.  At.  A. Time.  and then he would dump it on the floor immediately in the doorway of his new room.  When lunch time was announced, he stopped and said...

If nothing else, he is certainly a task oriented child.  One out of three's not bad, right?

ps - Did he sleep in his own bed last night?  Um, no.  There was screaming and crying for about an hour and a half.  Then he passed out on the floor in his room.  We moved him into his bed.  He woke up in the middle of the night...I walked him back to his room, rubbed his back until he fell back asleep.  And then at some point he ended up in bed between us.  Ike and I were up at 7:30 this morning, Chris got up a little before 9am and Quinn?  Yes, that stinker slept until almost 10am.  Unheard of.  Seriously.
Posted by Angie at 2:26 PM