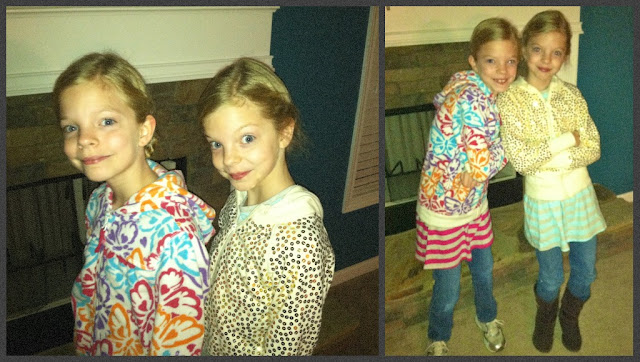 {Chandler dressed as Casey, Casey dressed as Chan}
Friday had several things going for it....

I believe the planets were aligned for them to play the ultimate prank...pretending to be the other twin.

Originally, the girls decided to dress alike on twin day.  They NEVER wear exactly the same thing, so that would definitely be something different.  And then we decided that I would french braid their hair and roll the ends under so that you couldn't tell how long their hair was (Casey has longer hair than Chan).  And then the girls asked if they could just dress as the other one and try to fool everyone at school.

Because of points 1, 2 and 3, we said yes.  This was probably their one chance of doing this and being able to escape punishment.  I mean really, who would punish a twin on twin day?????

But then they starting talking about their days - Chandler had her mile run test today, Casey has morning work to do - and began to doubt that this was a good idea.  And they were terrified of getting in trouble or making their teachers mad.

So they just dressed as the other one and tried to trick their friends, not the teachers.

I was actually disappointed that they were such scaredy cats about the whole thing.
Posted by Angie at 6:00 AM

Ha. You're a bad influence. On your own children. I love that.

Love the new site too!