Bathroom Part 1 and some new pillows...

A post about the bathroom and some pillows.  That doesn't really go together, now does it?  But that's a big chunk of what we've been doing this week.

Sadly, neither Chris nor I took pre redo pics of the bathroom.  Trust me, it was horrid.  Builder white, and no color.  Anywhere.  Except for the purple bathmats that I bought at Wal Mart when I thought I might want something to do with purple in the bathroom.  But here's what we did... 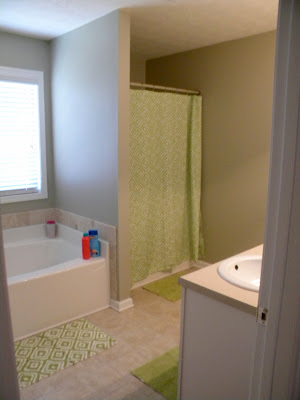 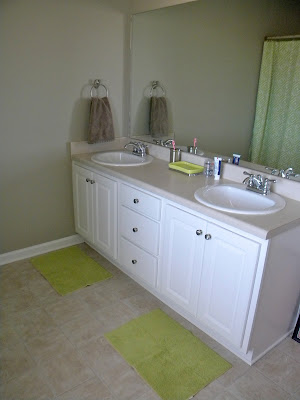 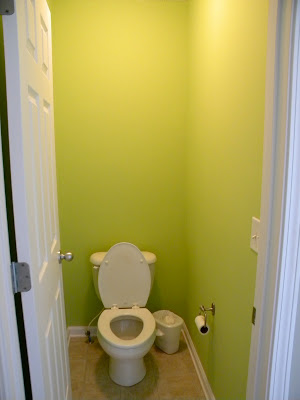 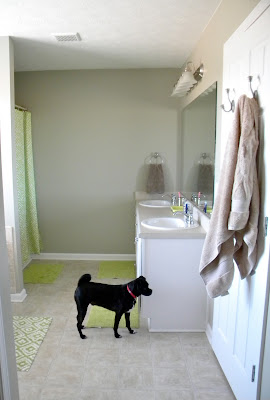 The funny thing is that we picked the exact same color as our bedroom.  Apparently, at Lowe's its called Sandstone and at Home Depot, its called Cityscape.  In case you were wondering.  The bathmats and shower curtain are on sale at Target right now.  The lime green tray on the counter is from Home Goods.  And that cute little puppy with the curly tale is from the pound.  He might go back to the pound if he tries to attack Abby again.  But that's a whole other story.  For another day.  He is cute, though, huh?

I was out to dinner with Molly when Chris painted the toilet room.  He texted me a picture of it saying, "Lime green water closet, anyone?"  It made me laugh.  And its exactly what I wanted.  Although I also want things to hang on the wall.

Its my goal of the weekend.  Bathroom wall hanging things.  And then I'll post some pictures of that.

The girls wanted to learn how to sew.  And since I am trying to get back in the running for Mother of the Year, I retrieved my mom's old sewing machine last weekend and the girls and I promptly began The Great Pillow Making Spring Break 2011.

Lindsey at the Pleated Poppy posted this tutorial a little while ago on how to make a pillow from a tea towel.  I took that as permission to but a $10 3-pack of dish towels in fabric that I love, and have been eyeballing, at Target to turn into some throw pillows for the bed.

I do love throw pillows.

Here's a side note.  I learned to sew while I was a theatre major at LaGrange College.  Part of my work study was in the costume shop.  So, I actually do know a thing or two about sewing.  Am I great at it?  No.  But part of that is because its been a solid nine years since I even sat at a sewing machine.  I had my mom's sewing machine at our house for years and kept telling Chris about my pillow and curtain making daydreams.  But I never did anything about it.  And then gave the machine back to my mom.  He thought I may have made the sewing ability up.

Translate:  He didn't believe I could actually sew.

So, imagine his surprise when I whipped these babies up this week.... 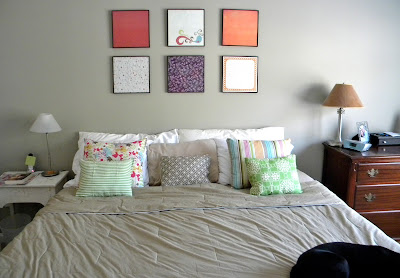 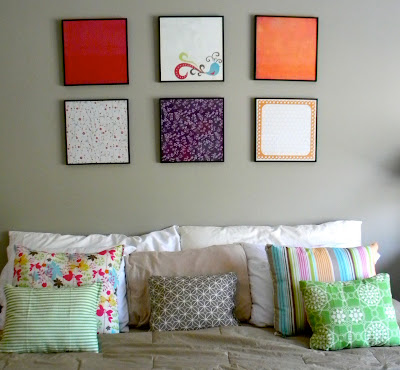 The front three pillows are from the Target dishtowels.  The back two patterned pillows are from Hobby Lobby fabric.  Now, keep in mind...they're really nothing fancy - no zippers, some of my edges are a little crooked...which is really ok, because that sort of thing just doesn't bother me for my own house.

The girls made some little pillows for themselves...pictures forth coming.  :)

ps - Did you notice that cute little dog in the pictures again?  He is pretty much my shadow.
Posted by Angie at 11:46 AM

The bathroom looks great! I love that Cityscape/Sandstone color. I should have used that in my guest room. Nice job on the pillows. Can't wait to see the ones the girls made. ; )

Man girl, you are on a roll!!! Love that gray -- that's the color I want to paint my room. :) The green is my fav-o-rite color. Both rooms turned out fab.