This is his graduation portrait, which is why he is looking all bright eyed and bushy tailed.  Most pictures that I have seen of him from this time period...um, not so much.  A little more sleepy eyed.  But this one....Can you even believe its him? 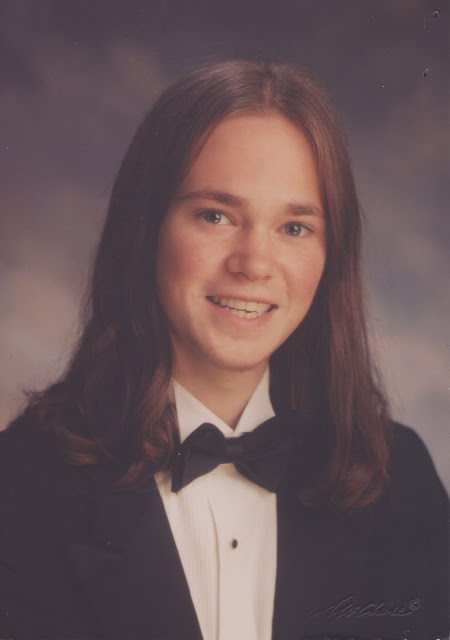 The long hair really is something, isn't it?  And I am quite certain that on the bottom half (because you know how they leave you in regular clothes from the waist down) he is wearing a ratty old pair of levis and some kind of birk sandals.  I would almost bet money on it.
And after this photo session he drove away in some kind of Honda, listening to Nirvana.  Gag.
We have often debated whether or not we would have been friends in high school.  I like to think yes because I tried to be friends (or at least friendly) with everyone.  He, on the other hand, is more doubtful.
But here it is, some weight gain (for both of us), hair loss (mine in length, his in....well, just loss) and 15 years later...happily married...with three kids....and in love.  So there you have it.
Perhaps some Prom Pictures will be coming up in the future.
Posted by Angie at 9:02 PM

It was a Toyota, and probably listening to Phish.

Wow!! Love it.
Chris, I always imagined you had blond hair for some reason.
Ang, this photo totally reminds me of Ashley Hodges and Jason Lee, so I think it's safe to say we would have been friends with Chris in HS. At least one of us would have been. ; )

Well that's certainly a blast from the past. Oh, the stories I could tell.... :)