Life With Ike...Not So Great.

Life with Ike these days?  Yeah, um, not so great.

I mean, God bless him.  He is basically a good dog.  When its just us in the house.  And no one is running outside.  Or the people across the street aren't working in their yard.  Or when the mailman has already passed our house.

We have accepted that he just isn't a people person.

People have dogs all the time that are flawed in some way....my aunt and uncle had a dog for years and years that hid under their bed and barked ferociously when people came over.  My grandparents had dogs that fought all the time with each other.

So we know that Ike needs to be crated/put in our room when people come over.

Keep in mind that we're home bodies with young children and we don't have people come over very often.

He has destroyed his crate.  Only when we crate him when there are people over.  He loves to be crated when we leave during the day.  To see his crate, one would think that it belonged to a pit bull...not a pug mix.  He howls and has scratched out the underside of our bedroom door.

So, at the beginning of the summer, I asked the vet for a sedative for the few occasions when we would be having a cook out.  It is clearly a source of great stress and anxiety for him and I know that I need to do something more about it.  While this is not a terrific solution, or a long term solution, it is kind of like a band-aid.  My vet didn't want to do something so strong, but rather prescribed something that would "take the edge off" - sort of like a cocktail.

We have used it several times this summer and have noticed no change in his behavior.

This is what he did tonight when Molly came over for dinner...

Yep, that's the carpet under our bedroom door.  We could hear him shredding it.  He also made sure to dig up the padding down to the flooring.  Awesome.
This is his crate.  He's been working on this baby for awhile. 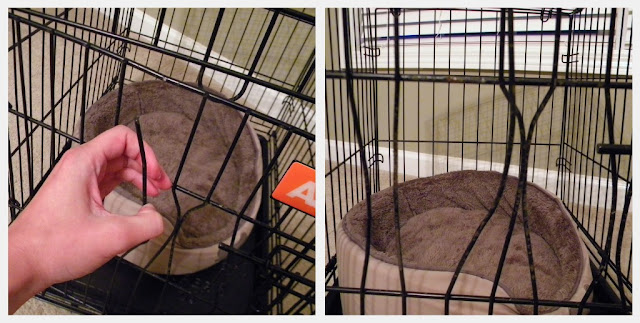 Well.  So, there we have it.  FANfreakinTastic.
He was harnessed and leashed and we tried to bring him downstairs and he was really just scary.  Like he might attack Molly's face.  And that's never a good thing.
Sheesh.  Life with Ike?  Not so great.