An Evening With Molly Remember Molly?  She's my best friend.  And she came to visit us last night.  I cannot even begin to tell you how my children love her.  I mean loooooooove her.  She has no children of her own and therefore thinks that mine hung the moon and spoils them beyond belief.  And they love that quality in people.  So, we had planned this visit for a little while and we were all looking forward to it...I had put on the menu for us to have roast chicken and green bean casserole and a big salad.  And then Chris woke up congested and not feeling well yesterday morning.  So when we got home from church and finished lunch, he decided to go lay down for a little while.  2 hours later when I went to wake him up, he looked like he had died a thousand deaths.  Bad.  Really bad.  Then we had this conversation:
Chris:  I can get up.
Me:  No, I don't really think you should.  I think maybe we'll just order something for dinner.
Chris:  I can cook.
Me:  I don't really want to eat food that has been handled by you right now.  Just sayin.

So, Molly arrived, Ike went berserk and tried to attack her, I put him in the bed with Chris, we opened presents, and then I announced that we were going out to eat.  Molly was a trooper and handled the surprise well.

We went up the road to the Hibachi restaurant.  You know, my favorite place ever?  We sat around the hibachi and Sonny cooked away for us.  It was especially great because Quinn was really memorized by all of this.  After he turned off the lights and made the big fire volcano (and we all screamed...in a happy, fun way), Chandler announce, "Now, THAT"S what I call entertainment!"

I took the above picture of Molly and Quinn at dinner.  See, Quinn is always blurry because he can't hold still.  Its true. 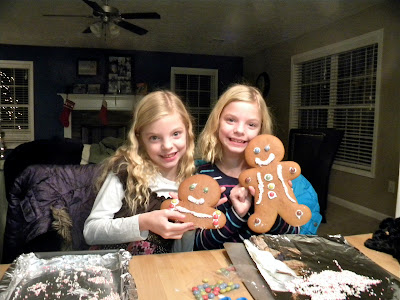 After dinner we came home, left Ike upstairs with Chris, and went about our business making some gingerbread men.  I told the girls to hold up their men so I could take their pictures.  As you can see, Casey's man is a double amputee.  She loves him anyway. He just wanted to show me a leg.  And he truly thought that I was just taking a picture of the man and not him.  But look, he's holding still! 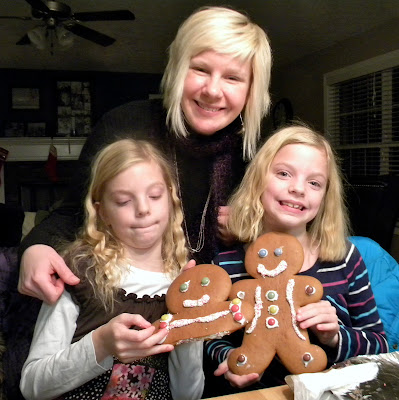 We took multiple tries of this picture.  In each one, Casey looks weirder and weirder.

And then because Quinn kept saying, "Me, too!  Me, too!" I took his picture with Aunt Molly again.  And again, he just couldn't hold still. 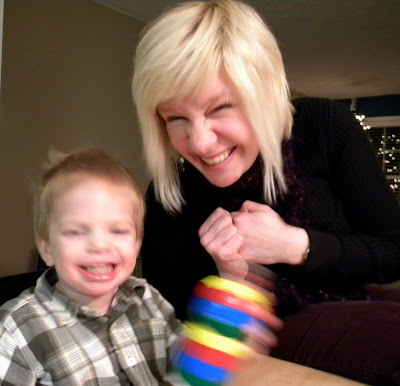 The funniest thing about last night is that Quinn insisted on calling Aunt Molly, "Meme."  And he would call her, "Meme!"  and I would correct him, "No, Quinn.  That's Aunt Molly.  Can you say Molly?"  And then he would say, "Mawwee," slowly and seriously back to me and then turn about and call her Meme.
Posted by Angie at 8:29 AM

And did you BAKE those gingerbread people??? I'm feeling a challenge!

No, Dad bought them at Trader Joe's and then shipped them in the box from Chicago.

You're so sweet. I loved our evening of Hibachi, volcanos & Gingerbread men. I adore your children. I think they are the best behaved & delightful children I have ever known.