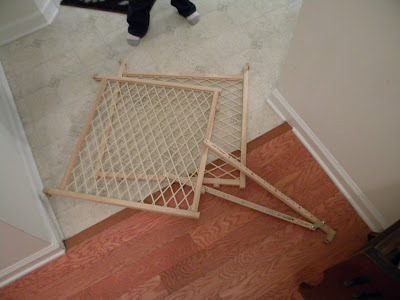 We keep trying to block off rooms so that Ike doesn't leave our sight.  This is in hopes that he won't poop somewhere in the house.  The reason why this hasn't been working so well is that Quinn doesn't like having the gates up and this is what he does to them.  Just to show the gates who's boss.  And then he jumps on them.  And then he goes about his business and Ike leaves the room and goes about his business...if you know what I mean.

And this one is just a picture of my children because they all gathered around when I was taking a picture of the gate.  My children are to the camera like moths to a flame.  Just sayin.  Quinn tends to be a little fuzzy because he has a hard time holding still. 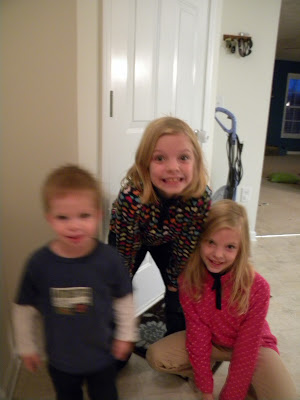 Today, after school, Chris took the kids to Wal Mart.  Quinn picked out this super cool block set.  But that's not why I took these pictures.  I took them because of the hat.  You see, it has been kind of chilly here in the past couple of days, so we've needed hats.  And Quinn has decided that this is the hat for him this year.  Its the only one that he wants to wear.  And its Chandler's.  It is a powder blue fleece hat with a big girly pompom on the top. 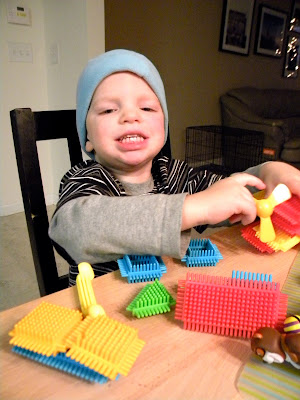 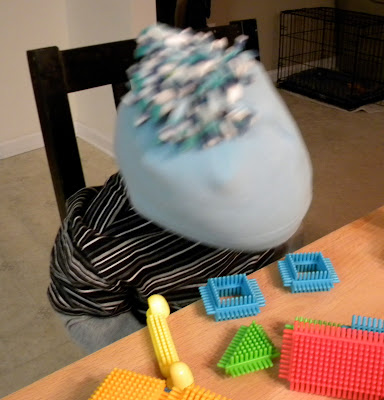 And then I told him that his hat had a big girly pompom on top and he gave me this face.  I think its the stink eye.  And he kind of looks like a thug.  Scary. 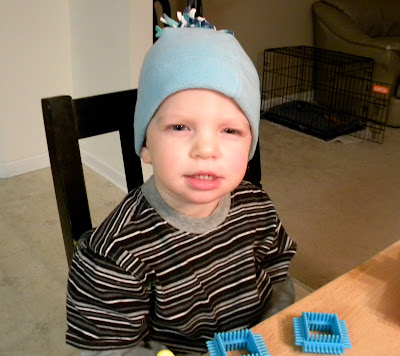 I have one with a manly pom pom on top. Maybe he'll wear that one tomorrow.

I kind of like that hat and I don't think it looks girly at all, really. I mean, the thug wears the hat. The hat doesn't wear the thug. Know what I'm sayin? :)

At that age he can get by with the pompom on top of his hat and by the time he's going to start getting teased about it by anyone but you, he'll be attached to another hat that is equally as revolting to you...TRUST me I have a 12-year-old with a fashion mind of his own, too.