Thanksgiving, Black Friday and the Aftermath

Goodness.  I can't believe that it is Sunday.  Already.  This break flew by in record time.  Here's the run down...

1.  On Wednesday we did a lot of cleaning.  And a lot of jewelry stuff.  It wasn't a very exciting day.   But necessary.

What, what????????  Score!  So, we quickly packed clothes for the kids and broke the news to them that they would be having 2 sleepovers at Meme's.  There was some screaming and squealing involved.

3.  We had a fantastic lunch at Mom's.  Matt and Chalise were in town from Texas, Ann and Randall came over, and it was just us.  And I like it that way.  Perfect.  Mom made stuffing which was Q's favorite thing on the menu.  He kept asking for more "fluffing."  There are pictures from this event on many cameras out there...just not on mine.  I didn't take a single picture.  Isn't that the worst???  I hate it when I do that!  Especially because I know there are pictures out there of Matt, Randall and Tom picking the turkey apart...and then of Matt making the carcass dance.  It was one of the most disgusting (and hilarious) things I have ever seen.  I also should have taken a picture of the to-die-for rum balls that Ann made.  Sheesh.  I think I may have eaten a dozen of them.

5.  We stopped by a couple of Michael's stores on the way home - picked up some big blocks for Q.  The plan is to build some monstrosity for Christmas morning with them and fill said monstrosity with balloons.  I don't think any thing would make him happier.  Best part?  40% off.  Hooray!

6.  We ate grilled cheese sandwiches and french onion soup for dinner.  Leaving the children with mom meant that we didn't get any left overs.  Ugh. 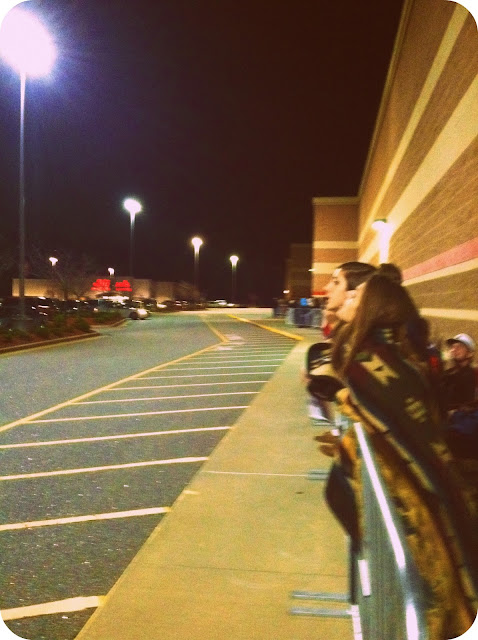 This is our local Target at about 9:45pm on Thanksgiving.  The doors opened at midnight.  We were in by 12:10.  It was AWESOME.  Let me just tell you, I have quite a few Black Fridays under my belt and this was really just about the best one ever.  First of all, it was date night for Chris and I.  We were determined to have fun no.matter.what.  We made friends with the people around us in line - a couple about our age were in front of us and then a redneck guy was behind us - his wife was at the Wal Mart.  They were trying a divide and conquer tactic.  We had a list of things that we wanted to get, but if we didn't get them, it wasn't going to be a big deal.  BUT....we managed to get EVERYTHING that we came for!  Can you believe that luck!???!  Super AWESOME!
It was 12:48 when we were pulling out of the Target parking lot.  We moved on to Old Navy...madhouse...Macy's and a few other mall stops and then Toys R US.  We could get in and move around at the Toys R Us...but the line...oy vay.  Not good.  Those poor people probably spent hours waiting to get in the store and then hours waiting to check out.  Not fun, if you ask me.
I really think that everyone should take a cue from Target.  Such a pleasant experience.
8.  We got home a little after 3am.  I can't tell you when the last time was that I was out driving around at 3am.
9.  We slept until 11ish.  Ate some lunch, lounged around, and then decided to head back out for a little bit.
We have a few odds and ends pieces still to get, but otherwise, Christmas around here is DONE.  Hooray.  Now if only the elves would appear to wrap all of this stuff.
10.  We ended Friday by eating at Olive Garden.  It had been soooooo long since we'd been there.  And since we had no kids with us, we ordered dessert.  Mine came in a liquid form. 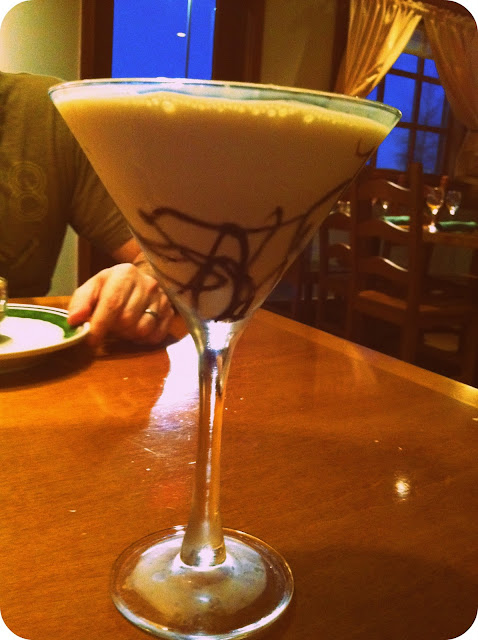 This would be a Toasted Marshmallow Amour.  I highly recommend it.  Seriously.
11.  Then, because my sleeping schedule was all thrown off, I couldn't go to sleep until 12:30.  Not good, Friends, not good.
12.  Saturday morning I headed out to Mom's to pick up the kids.  We ordered pizza for lunch and watched the Ga. vs. Ga. Tech game.  I love it when Georgia beats some Ga. Teach hiney.  Just sayin.
13.  Chris stayed home to WORK.  Blah.  Blech.  Yuck.
Whew!  I feel like I am still in recovery mode.  I definitely need a few more days off to catch my breath.
Posted by Angie at 11:57 AM

I want a Meme!