What I Wore Wednesday Week 24

Linking up with The Pleated Poppy for another week of What I Wore! 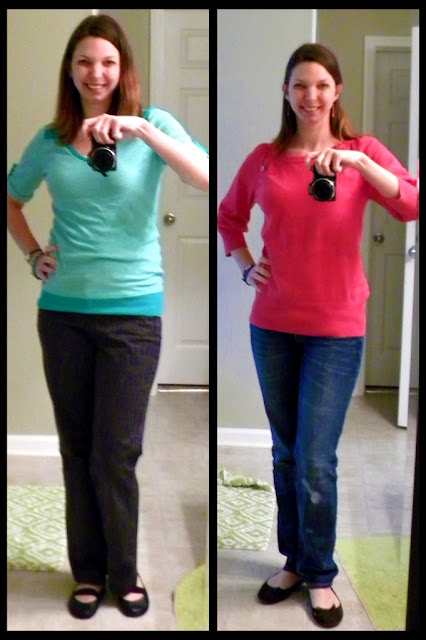 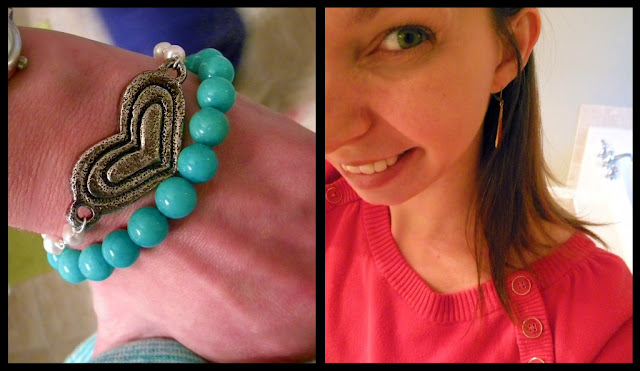 one
heart bracelet - IKE & CO
aqua bracelet - IKE & CO
two
{I heart the buttons on this sweater}
vintage earrings - Darlybird
Here's a little story (and perhaps only my mother is interested)...  When I visited my Gram in January (for the big interview) she surprised me by giving me her original wedding ring set.  See, she and my Papa got married young.  Super young.  Like he brought her to his senior prom as his wife.  Screeeeeeech.  Can you believe that???  He had bought her a small (but simple and sweet) engagement ring and matching wedding band.  She wore it until she broke the back the band of her engagement ring.  And then for their 25th Anniversary he gave her a beautiful diamond band that she still wears today.  Her first wedding set had been back in the box since the mid 1970's.
But she gave it to me.  And it was probably the best gift she ever could have given me.  I love it that she thought of me and wanted me - her first granddaughter - to have it.
I also really, really love rings.  During the summer I usually only wear a band...I don't work during the summer, my fingers swell in the heat...blah, blah, blah...  But lately, this is the combo that I have been wearing and I love seeing it on my finger... {I think my Papa would have loved seeing it too.} 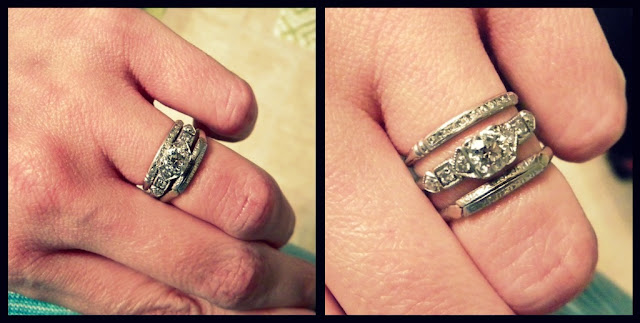 Labels: what i wore

I love your rings. I am in the process of having my grandmothers ring from the 20's repaired. It looks a lot like yours. Don't you just love rings from that time period. Hopefully it will be ready this week.
Thanks for sharing
Traci

love the rings!!!!!!!! I'm stopping by from the lovely poppy and would love for you to checkout the huge ($100) giveaway i'm having that ends tomorrow- http://thelovelypoppy.blogspot.com/2011/10/blog-follower-giveaway.html

Gorgeous rings! So pretty and so sentimental!Cute outfits too!