Best Braid Ever...and some other things

One thing I love about having daughters is braiding hair.  I don't know what I would do if both of them decided to chop off their hair at the same time.  I taught myself how to french braid when I was in elementary school but really mastered my skills when I was a teenager and my aunt owned a beauty shop.  She had fake heads.  I practiced on them for hours...french braids, fishbone braids, 4, 5 and 6 strand braids....

But Casey's braid today may have been one of the best braids I've ever done.  Seriously.

We cleaned Chan's stitches today.  ***So scroll past the following pictures if stitches gross you out.**  Although they are very small.  And when I say "we" I totally mean Chris.  It looks good.  She goes back next weekend to have them taken out.  And really, the white bandage makes it seems like the wound is some 6 inch, gaping open kind of thing.  Its not.  1/2 inch at best.  But she feels cool in it and Casey is jealous, so the white bandage is kind of important. 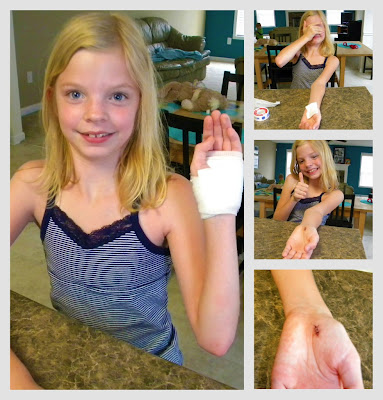 Multiple times she has mentioned that she would like to have a Harry Potter scar on her hand.  I'm thinking about telling her it looks like Harry's scar whether it actually does or not.
Today was actually a pretty great day.  We looked at living room furniture (it might be time to replace the 15 year old couches that are hand me downs from my parents).  We stopped by an antique store that we've been passing for 3 years now (we will be continuing to pass it from now on).  We went to Old Navy, Target, Michael's, Loft, Home Goods, Kohl's, Macy's and the Gap.  Whew!  It was a lot.  But fun for me because I would have felt such guilt going without everyone.  It was not fun for Chris because it was shopping...with kids...on a Saturday.  Such is life.
Posted by Angie at 8:46 PM

I will definitely need your braiding skills for Janie...as soon as she gets some hair. I suck at braids.

That is definitely a beautiful braid that deserves an occasion to go with it....and a pretty impressive gash on the hand too.

I'll never forget the time the girls had a sleepover with me and they wanted 'punch braids' for church and I felt like such a failure that I couldn't do it.