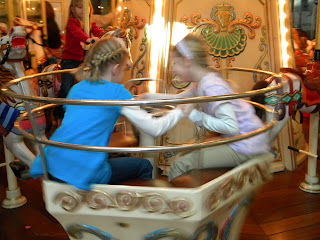 It was a carousel ridin' kind of day. We took the kids up to Mall of Georgia just so that we would not all be stuck in the house together all day and took Q for his first spin on the carousel. He loved it for the first 38 seconds. Then he didn't want the strap around him and he really wanted to switch horses. He didn't understand that it doesn't work that way. The girls have outgrown the horses and have moved on to the spinning cup. 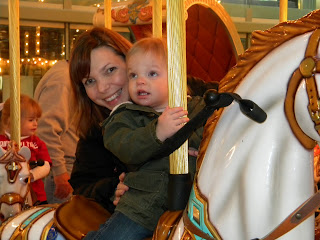 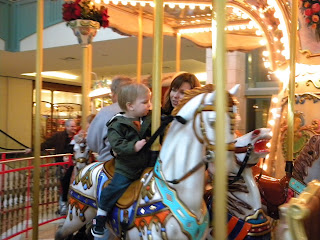 Following the carousel ride, we returned home. Q had spaghetti for lunch. It is something that he will never have for lunch again. He was covered in orange. Bath time immediately followed lunch which was then followed by nap time. Only Q decided that a nap was not on his schedule for today. He stayed up there "talking" for a good twenty minutes before the screaming began. Chris went up to check on him. Then there was this...

So, I raced up there stairs to find Chris standing in front of the crib and Q standing in the crib, grinning from ear to ear. Next to Q in the crib was a giant turd. He had pulled his diaper off and then rubbed the turd on his sheets. Awesome. My only thought was, at least sheets are easier to wash than walls...which is where the girls rubbed a turd one day during their nap time. So, we got him all cleaned up, sheets in the wash, paci back in his mouth and now he is taking a nap. Hopefully with his diaper on this time.

My mother has requested that I use larger pendants and make some necklaces a little longer... for people that have a "swimmer's neck" - like hers - instead of a "chicken neck" - like mine. (Chris said my neck was more like a "swan's neck." That's very sweet of him, now isn't it?) So I worked on this large pendant, longer necklace, last night. 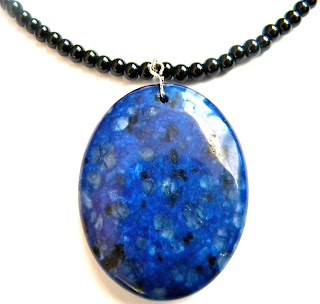 wow. i thought you having a bad day after i read about the spaghetti...you win. btw, i like your jewelry.