There's a New Gangsta in Town...And We Fail as Parents 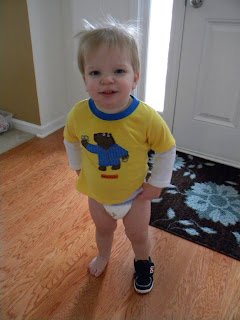 ...and apparently you only need to wear one shoe and pants are optional to be a member of his gang. 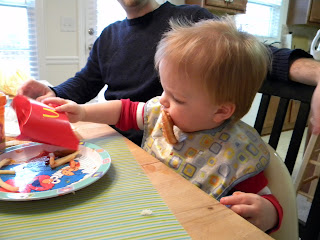 At lunch today, he decided it was best to just let it all hang out.

And today, Chris and I both received F's in the parenting department. All week the girls have been pumped up about going to one of their friend's birthday party. I told them it was today. I threatened them with it all day. You know, "If somebody doesn't get in the tub, we're not going to the party." "If you don't finish picking up your room, we're not going to the party." And so on. Back to the story...so we left the house with just enough time to swing by Target to pick up presents, wrapped them in the car in the parking lot and headed on our way. As I was wrapping the presents, I was contemplating the fact that on my check I wrote the date as 01/23/10. I was fairly certain that the party was supposed to be on Sat, 1/24/10. But that wouldn't make any sense. The 24th is tomorrow. But today is Saturday. So, I called Chris and had him pull up my email. Yep, the party is tomorrow. The girls were heartbroken. I told them to look on the bright side, at least I didn't think the party was today and have it really be yesterday. At least now we have a 2nd chance to get it right.

Chris gets an F because he started eating food off Chandler's plate before she was finished.
Posted by Angie at 7:44 PM

I thought she was finished. Really, I did.

Jonah is the leader of the new gang because pants...well who needs em? :) Your poor children must be starving with Chris stealing their food and all! Jeez....