I Just Can't Quit You 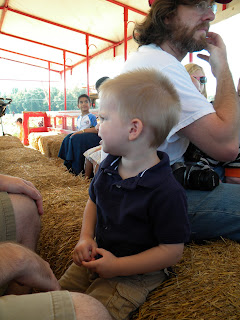 We decided to go to the pumpkin farm this weekend.  I actually remembered to bring my camera for once.  And then I took 5 pictures.  Three of them were of the above shot...I kept trying to take Q's picture, he would turn, say "Cheese!" and then whip his head back around before I could actually catch him.  So Chris took the below picture... 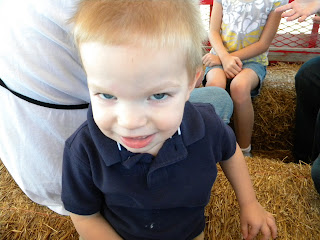 ...and my son looks kind of evil.  And like he has a giant size forehead.  Which he kind of does.  My brother, Joey, once wanted to know if we were planning to rent it out for billboard space. 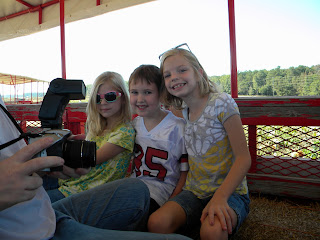 And then I took this picture of the girls with their cousin, Jonah.  My brother-in-law, Mark, was taking pictures of baby Janie at the same time...which is why his camera is in my shot.  To be fair, I didn't tell him that I was taking a picture.  He would have moved if I had told him. 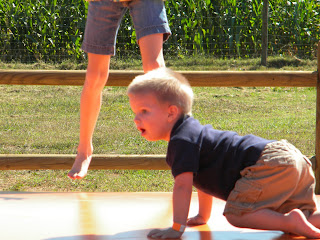 This is Quinn with a look of terror on his face.  They had a "bounce pillow" at the pumpkin patch and all of the kids were very excited about it, including Q.  Until they actually got on it.  And then he realized that he couldn't stand up with all of the other kids jumping.  And there were a lot of other kids.  Chris said he was fine.  I said he was terrified and made Chris go get him.

At the end of our pumpkin patch experience, we actually went to pick our pumpkins.  We usually just get small ones.  We're not the pumpkin carving bunch, so small is good enough for us.  Only nothing, I repeat, nothing was good enough for Quinn.  And then he started throwing pumpkins and having a melt down.  He was rewarded for this behavior with an early trip to the van.

On Sunday, we went to church and then out to lunch with Dr. Ayers.  Quinn has taken to calling him, "Doc A."  It is super cute.  After that...home for a rest (which didn't happen), play time with Ike and then we went to Molly's for an Oktoberfest party.... 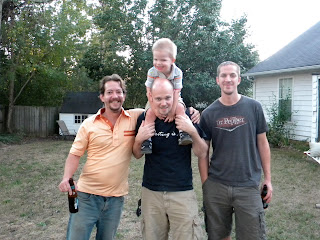 The boys...Andre, Chris and Q, Ben.  Quinn was just hanging out on Chris's shoulders and when I told them to gather for a picture, Q hugged Chris's face and began shouting, "CHEESE!"... 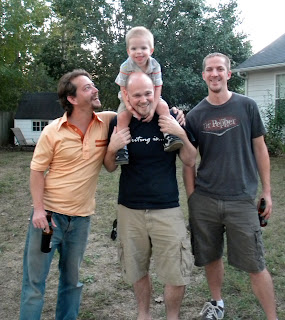 ...which made everyone laugh. 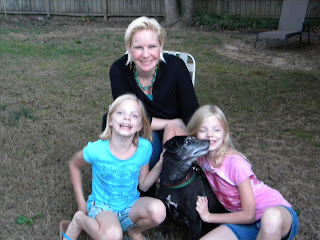 Aunt Molly, the girls and Twig - the three legged dog.  OMG how my girls love this dog! 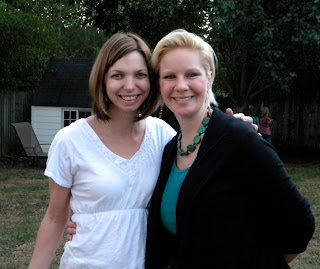 My plan was to take Fall Break off from blogging...post the winner Tuesday night and then start back up on Wednesday.  But, clearly, I just can't quit you.  Even for four days.  Big sigh.  :)

Now...if you haven't already, you should put your name in the hat in the giveaway below.  Go on.  Do it.
Posted by Angie at 9:06 PM

You must not have heard Jonah screaming "I hate you" at me as I'm telling him we have to leave the Pumpkin Patch. Oh what a lovely time. I'm sure Quinn was a gem compared to that. You forgot to mention the lack of funnel cake. Because, they really should have funnel cake at the Pumpkin Patch. :)

What kind of disreputable place is this? I mean, you let Quinn sit next to some scary looking perv? I think I saw that guy downtown with a bottle hanging around his neck. Oh crap. That's me. Well, I guess your kids will be more accepting of freakish looking people than most people. ;)

ps. next time, just kick me.

It struck me looking at the pictures that your girls could be Mollie's.....and her dog could be yours....and perhaps you wish it was. And thank you for posting. I was getting crazy.

I thought maybe you were the family who'd gone strawberry picking in the same field as me this past June. The mom kept trying to get pictures of the little boy (about Q's age) picking. The boy had learned to say "CHEESE" when he heard the phrase "let me take a picture of you!" But he didn't seem to realize that he actually had to turn around and look at the camera. So for nearly a half hour, the mom chased the boy with her camera, while he merrily toddled through the rows looking down at the strawberries, and yelling "CHEESE" every few seconds.

What a fun evening! I am so glad you all were able to make it. The girls and Quinn delighted my whole family and they thought your children were just adorable. You guys really made the evening fun.
I love the photos of the boys. -What a motley crew.
And yes, I think we do always strike the same pose, but hey it works for us. ; )