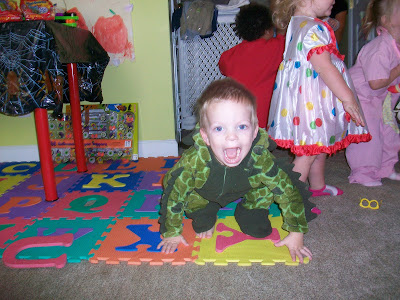 Quinn had his Halloween party at school today.  He decided he wanted to wear his costume from last year, mainly because he is suddenly BIG into dinosaurs.  I think all little boys go through a dinosaur phase, and trust me, his has definitely started.  Chris and I both had to work today, so we weren't able to be apart of the party, but thankfully, the ever fabulous friend CB, was there with her daughter.  She snapped some great pics of Quinnasaurus!  Above he is in his roaring-attack stance.  He's scary, isn't he?  Below...well, who wouldn't make that face if they were given a box of raisins for Halloween?  I really can't blame him. 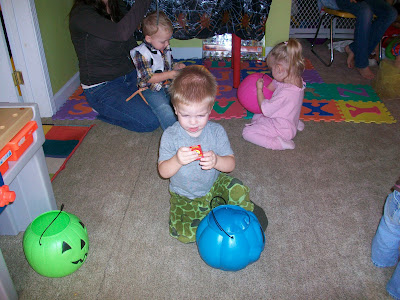 I can just hear his thoughts..."Raisins? WTF?"

Ahh, this is the Quinn we have all been waiting for.