Since I Shared Chandler's Letter... 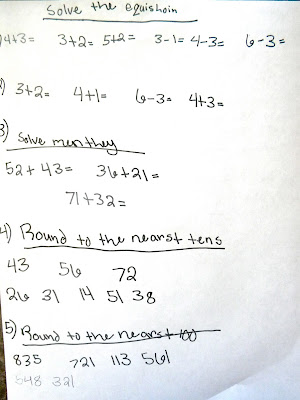 Since I shared Chandler's letter the other night, I figured perhaps I should share Casey and Quinn's handiwork.  I found these things while cleaning the house this afternoon.  The pictures above and below are of a math test that Casey wrote.  And from what I can tell, she wrote it for herself to then complete.  You can tell that she is a math teacher's daughter, right?  Question 1 is "Solve the Equation" and Question 3 is "Solve Mentally".  Don't ask me where Question 2 is.  I don't know. 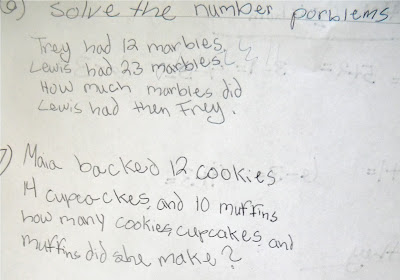 The letter below is also something that Casey wrote.  The "I" is meant to be Chandler.  Sneaky, isn't she?  It reads, "I promise to go first in the shower Wednesday and Thursday.  I will also let Casey sleep alone."  (and then something I don't understand) She read this out loud to Chan the other night and asked her if it was a "yes" or a "no."  Strangely enough, Chandler said no.  Go figure.  So, being the diligent record keeper that Casey is (she loves to fill in forms and make checklists), she wrote, "Chan P" in the no slot.  Just in case she forgot
a.  What Chan's answer was.
b.  Which Chan she asked.  "Chan P" should totally help her out with that one. 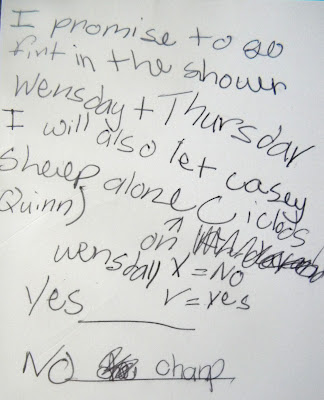 Below is Quinn's handiwork. 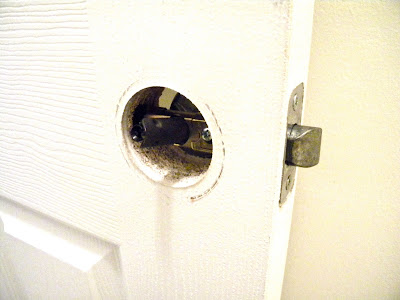 I'm not really sure what he did, or how he did it, but the front part of the door knob in our bathroom is not on there anymore.  You also can't close the door all the way now, unless you would like for it to take you approx 11 minutes to open the door to get out.  I know, it happened to me.  The thing that is really puzzling (because I know oh so much about door knobs, there is only one thing that is puzzling me) is that the screws are still in the handle.  I don't understand how that works.

Oh my. Look what Chris is doing to that poor girl! Solve the equation? Lol. And Quinn. If I'm ever in jail, I know who to call to bust me out!