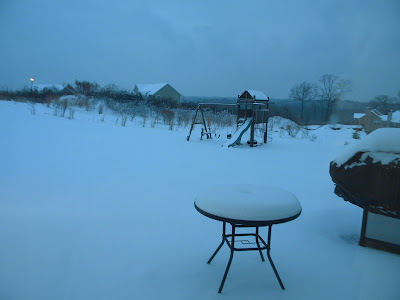 This is what our backyard looked like this morning when we (Chris) woke up.  Holy snow day, Batman!  That is an awful lot of snow for us!  And it was beautiful. 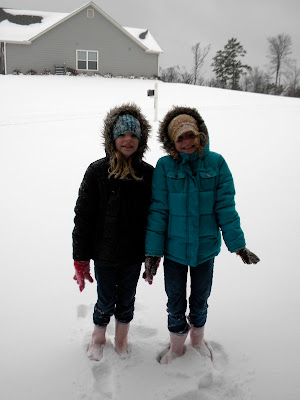 Chris and the kids went out shortly after breakfast.  I stood in the garage and took these pictures as they were coming in.  I lived in Chicago as a child.  I've played in lots of snow.  I just don't really feel the need to be that cold.  And I prefer spending a snow day in my pajamas.  With a cup of coffee.  In my warm house.  Just sayin.  The girls were super cold and have decided not to go back out again today.  I don't blame them. 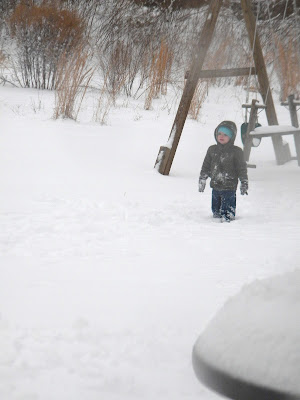 I took this picture of Q from the kitchen window.  Chris was trying to coax him back inside and he wasn't having it.  This picture was just before he started stomping his feet.  He was about to throw himself on the ground in a fit, but thought better of it.  I'm sure he worried that no one would pick him up out of the snow, and that was a valid worry.  We would pick him up if he fell, we might not pick him up if he threw himself down in a temper tantrum. 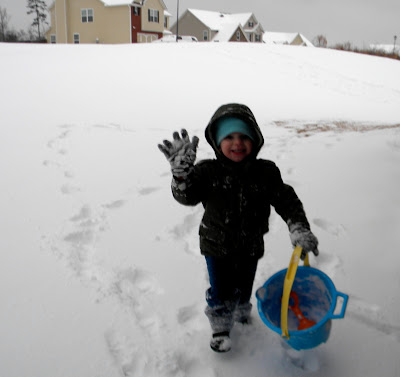 Oh, look, someone rethought his decision and decided to join the rest of the family in the warm house. 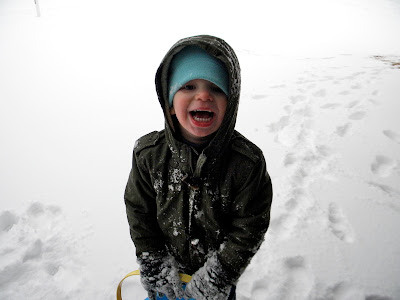 But he does LOVE the snow.  I think he is going to live somewhere up north when he grows up.  And then we won't see him during the winter months.  Because I just don't want to be that cold. 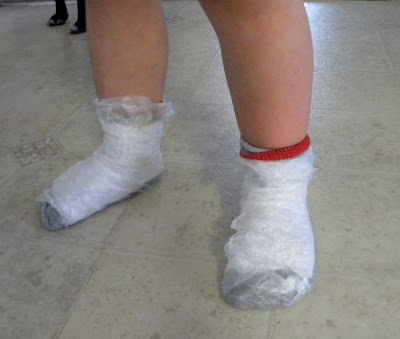 My husband is a genius.  Have I told you that?  Look at this forethought...he wrapped Q's feet in press n' seal wrap before going outside so that his tootsies didn't get all wet.  So very smart.  My mother told me that they used to wrap their feet in bread bags as children.  Also a very smart idea.
Speaking of genius...we don't have a snow shovel.  Chris has tried many different things in years past to shovel the driveway (like a cookie sheet), but this year he attempted to build his own snow shovel.  Its a box.  Cut apart.  And wrapped in duct tape.
Need I say more? 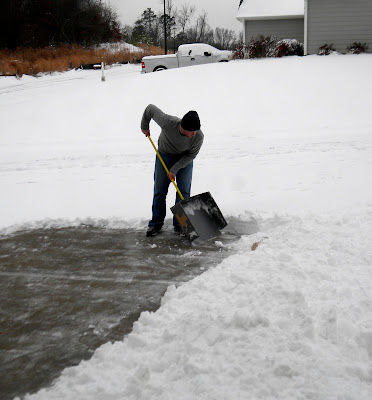 OOH! Enjoy the snow day - that means reading around my house... and hot cocoa and a big warm blanket!

Chris is cracking me up. That shovel looks ingenious and quite effective. Perhaps he could market that idea. I also like the wrapping of the feet. Too funny.
Hope you enjoy your snow day. I'm home from work today but not sure yet about tomorrow. I'll call you later today.

Um, he totally got the wrapping of the feet from mom. When we were kids and it snowed, mom would wrap our feet in plastic sandwich bags before we put our shoes on. :) The shovel on the other hand, that's all Chris. He needs to patent that thing...and then create an infomercial for it. :)