Fatherhood kind of sneaked up on Chris the way a hand grenade sneaks up on you during trench warfare.  Dropped from the sky with no place to go.

When we started the dating the girls were almost 3 and a half years old.  They called him "Chris Pengwee" and wanted to know if he was going to be their dad.

And one night, he said yes, he was going to be their dad.  And within 30 seconds he went from being "Chris Pengwee" to "Daddy" and he has looked back since.

Well, he may have looked back from time to time, but he at least waited until I was out of the room to do so.

On our wedding day, he gave the girls lockets and told them about how special they were because he chose them.  He wanted them to be his daughters. 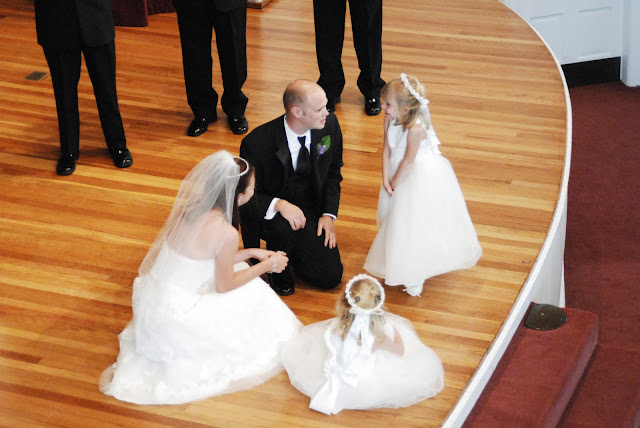 The girls remember our wedding...the day WE (meaning the 4 of us) got married.
Everyday, I am thankful for him.  I am thankful for the father that he is to those little girls (who are growing up to be big girls...ugh).
And I am thankful that we decided to add another one to the mix....a son to round things out.
I am thankful to have him as a husband.

This is just so, so sweet. I loved it.

That is a very sweet story and what an awesome photo!