I feel as though I may be in over my head (just a tad bit) with this yard sale thing in the morning.  Only it has to happen.  HAS. TO.  And really, let's be honest, I should be in the garage, pricing things, right now instead of in here (the air conditioned kitchen) writing a blog post.

Chris has taken Casey to her finale rehearsal for recital and I am home (working!)...stuck with the other two children - one who doesn't listen to me and one who just doesn't listen period.  I'll let you think about which one is which.  So far, I feel as though I may be on the edge of a mental break down.  I may need to make a pot of coffee to get through the night.

Chris successfully moved a ton of furniture for the yard sale out to the garage today while I was at my workshop.  Pretty much everything except for the sofa.  I was supposed to help him with that when I got home.  I'm not sure if you have seen my arms or not, but I am not really the most muscular person.  Like moving a couch is kind of out of my realm of possible activities.

I could not pick my end up off the ground.

There, I said it.

I am a weakling.

So, Chris felt that he could not wait for reinforcements and managed to make this happen.... 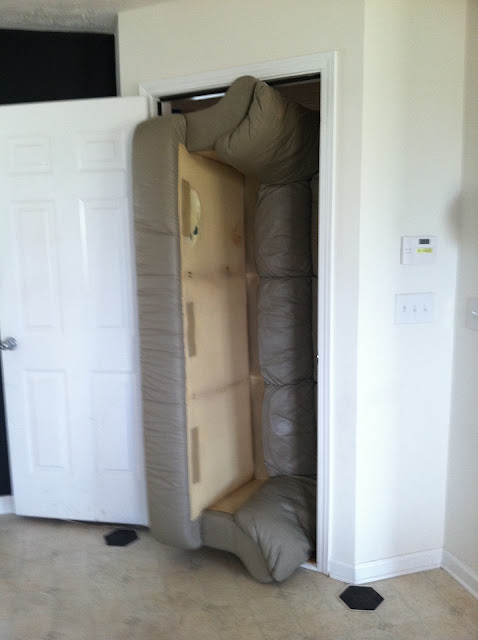 All by himself he did that.  Pretty impressive right?
I'm not really sure what it says about his spacial imaging skills.  Just sayin.
He was really sweatin by the time he had done this.  Really.
I was supposed to be helping.  (I'm not really sure how.)  But instead, I grabbed my phone off the counter and began taking pictures.  At which point, he yelled from the other side of the couch, "Are you gonna blog about this???"
Darn tootin, I am.
In the end, I convinced Chris that it just wasn't going to work.
He backed the couch back into the kitchen, picked up one end, called over our 9 year old daughter, Chandler, told her to hold the end, then picked up the other end and the two of them moved the couch out to the garage.
Show-offs.
Posted by Angie at 5:38 PM

You make me laugh!! Thank you for sharing your life, family, and thoughts.

Man, I bet Chris is going to be hurting tomorrow! Good thing you have Chan around to help move furniture. Now I know who I'm calling next time we have something to move. :)

What a great picture! Yep, not going out that way. So how was the yard sale? I was thinking about you guys when it started pouring down rain at 11am today. Can't wait to hear how it went!

I laughed out loud when I saw the picture of the couch! Jason was moving an extremely large, awkward, and heavy TV to his truck yesterday and on his way out the door he realized it wouldn't fit! I didn't know what else to do because I too am a weakling and could not help so I just started laughing and he got so mad! I'm glad I'm not the only wife who finds the comical side to life's tragedies :) Next time, tell Chris he can just call Jason to come help!