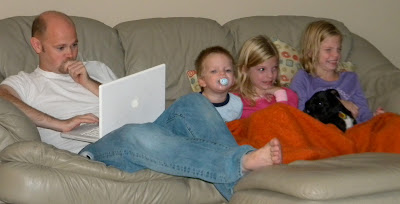 Chris streamed The Land Before Time last night on Netflix.  He loved this movie as a child.  When it started, I made the face.  The what-in-the-world-were-you-thinking face.  Because, I, did not love this movie.  It was scary.  And my children felt the same way.  Or, rather, they would have felt the same way if Chris hadn't edited the movie down to a mere 25 minutes...he skipped all of the dinosaurs attacking other dinosaur parts.  During the first scary scene Quinn kept saying, "Oh no.  Oh no.  Oh no." in a somewhat frantic tone.  It was then that Chris realized that he may have chosen poorly.

Someone once watched the girls for us when they were around 4 and thought it might be a good idea to watch Big.  They found out quite quickly that it was not.

Someone else called us while they were watching the girls to see if Forest Gump was a good idea.  Um, no.

So, really, The Land Before Time, is an excellent choice in comparison.
Posted by Angie at 10:35 AM

The Land Before Time is historical fiction. The dinosaurs actually did kill each other. The movie gives them those cute little rounded bodies and smily faces to take the edge off.

I do that sometimes. . . remember a movie that was wonderful when I was younger. Only I forgot the yucky parts until I build up the hype for family movie night and turn it on. eek!

The original Land Before Time movie is not a good one to show your kids. Get the ones that follow. Linus watched The Land Before Time: The Big Freeze constantly when he was younger. Not nearly as bad. :)Cheesy, yes. Scary, no.