A Story About Ike and Duke 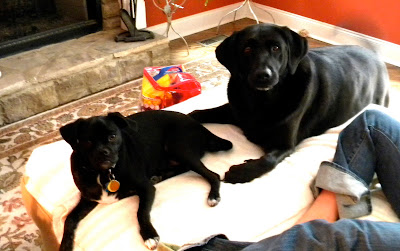 Ike (our dog, on the left) traveled with us to my mom's house this week.  Her dog, Duke (the gigantic beast on the right), who weighs 102 lbs, was very happy to see him.  Despite the fact that they chase each other (poor Duke just can't seem to keep up) and nip at each other (Ike is notorious for biting Duke's rump and the back of his legs), at the end of the day, they were best friends.  Here they are on the double size ottoman.  Duke can't quite fit all the way on it, but he still wanted to be close to Ike. 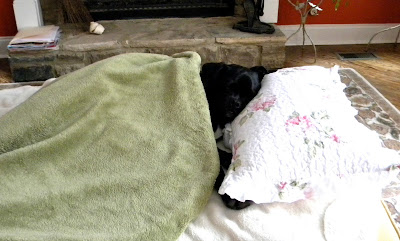 The girls also helped to make sure that Ike had the most comfortable afternoon naps ever.  This is what I mean when I say this dog is beyond tolerant with our children.  He let the girls cover him up and adjust him so that his head was on the pillow.  And then he slept there...for quite some time. 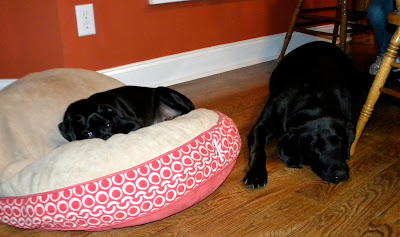 This is evidence of Duke's ability to be a selfless host.  That's his bed that Ike is sleeping on.  Duke let him borrow it, and was happy to take the floor right next to him.

Now, if only we could get Ike not to poop in my parents' living room and ferociously bark at Tom and Randall, I think he'd be invited more often.

I'm guessing Ike is Dukie, just based on the name.