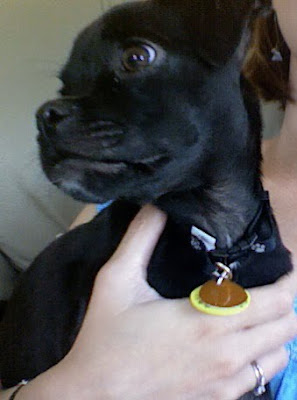 Well, he's home. And he's not too fond of the noise that the camera makes. Actually, I shouldn't say that...he is really just super curious and can't keep his nose out of the lens. So I snapped this one with the ever so handy photo booth. He was watching Chris make a grocery list. And you can't really tell from the picture, but he is incredibly cute. And he has a cute little pugish tail - you know, kinda curly. He's also been very good today.

We're calling him Oliver for now, but he doesn't look like an Oliver to me. My vote is for Henry or Ike. And Chris likes Ike. (Heck, who doesn't like Ike??? And then we could all wear the "I Like Ike" buttons from Eisenhower's campaign. How fun would that be???) But the girls have vetoed both Henry and Ike. Big sigh. I don't think that he even feels like an Oliver, and wouldn't that be terrible...to be stuck with a name that you don't feel like?

And in other news...Quinn came home from the sitter's early with a fever. Awesome.
Posted by Angie at 2:11 PM

He is very cute and a shiny looking puppy !! Congrats on your new pet !