Not One of Our Best Parenting Days 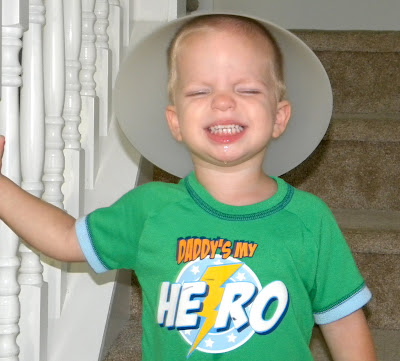 The day began with Quinn taking off the lampshade and pretending it was a hat. I hope that this is not an indicator of what his college days are going to be like. If it is though, I think he gets this behavior from his father. Just sayin. 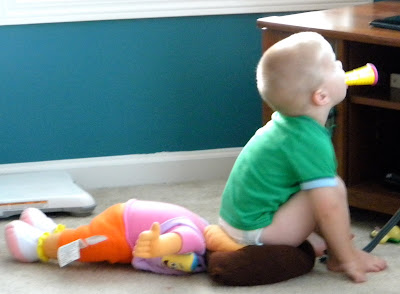 And then there was this. Poor Dora. I really do feel bad for her. I understand that she is a pillow, but I don't think that she wanted him to sit on her face like that. Again, I hope this is not an indicator of what his college days are going to be like. Just sayin.

And then there were the things that were not captured digitally...

He ate part of a Scrubbing Bubbles Toilet Gel wand today. You know, its blue and you press it onto the inside of the toilet so that it cleans every time you flush? Well, I'm pretty sure he thought it was a Push Up Ice Cream Pop. I found out that my mother-in-law was right, the people at Poison Control are absolutely some of the nicest people out there. The lady warned me that his mouth might burn and he could possibly throw up, but otherwise he should be fine. If he got worse, her name was Claire and I should call her back. She was so kind I thought about calling her back just to chat.

Following that episode, he had to have his teeth brushed and get cleaned up, because he smelled like a toilet. Really, it was coming out of his pores. You could smell him before he entered a room. Now, granted, it was a clean toilet smell, which is better than the alternative, but still. He stunk.

Chris put him in the shower with him (which Q loves) and they had a grand time. After the washing was finished, Chris stepped out to dry off and left Q (within arms reach) sitting on the floor of the shower to splash in the puddles. But Q decided he should stand up. And then he fell.

As you know, nothing slows this kid down, so when he spent the next 20 minutes limping, holding onto his hip, I was a little concerned that we might have to take him to the ER. And then if they wanted to administer any medication we would have to inform them of the Scrubbing Bubbles that were flowing in his system. And then we would be named Parents of the Year.
Posted by Angie at 7:10 PM

Oh I had to ask mom once if they keep track of the number of times you call Poison Control since they ask for your number and everything. We called them pretty frequently when Jonah was Q's age.