Today is Our Actual Anniversary. 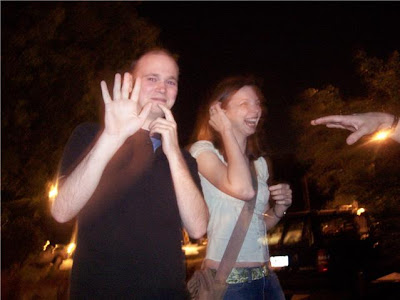 This is us. 5 years ago. When we were young. (I can say that because we are now over 30. We were under 30 in these pictures.) And not married to each other. Not even dating each other. 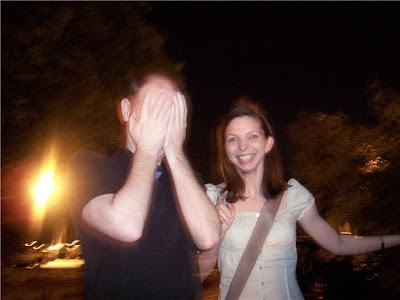 Don't ask what was going on here. It was ridiculous. We were out celebrating. His friends, my friends, and suddenly we were a big friendly group of friends roaming downtown Athens. 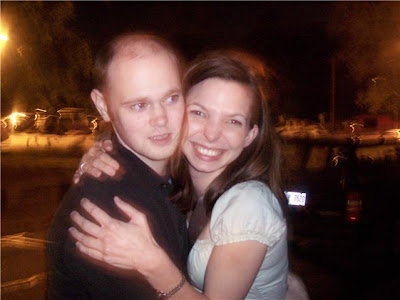 5 years ago, I was a 27 year old single parent of twins. Their biological father was not a part of our lives, so it was just me. Well, me, and my parents who lived 45 minutes away and could drop everything on a moment's notice for us and took the girls for me a few times a month so that I could have a little break (you know, to grocery shop, enjoy a quiet house, and roam downtown Athens with a friendly group of friends). And I had an amazing support group of neighbors and friends.
I was also in my 5th year of teaching middle school. I was told in December that when we came back from Christmas Break that a student teacher would be in my classroom for part of the day and in my teammate Donna's classroom for the other part of the day because they were studying both Language Arts and Math.
I wore a yellow sweater and cream cords the day I met Chris. He was waiting in my classroom for me when I arrived that cold morning. We shook hands, I told him the schedule and showed him around my room. And from that moment on, we were colleagues. He had a girlfriend and I had a boyfriend. We listened to each other talk about these relationships, about our families, our studies, our friends, favorite books and music and movies. We ate lunch together in the school cafeteria. We wrote lesson plans together and attended meetings together. We were with each other 8 hours a day, 5 days a week.
At the end of his student teaching, I felt like I had made a true friend, someone that would be a part of my life in some capacity for forever. It was a bonus that my school hired him as a first year teacher for the next school year. The Friday night of his last day of student teaching, we gathered our friends and headed out for the evening. There was dancing. There was drinking. There was laughing. There were good times and memories being made.
That next Monday morning, he was no longer a part of my classroom, and I missed him. We began a casual email friendship. He and his girlfriend had broken up. My boyfriend and I had broken up 6 weeks earlier and I had begun to step back into the dating pool. But still, neither of us had any idea what the summer would hold for us.
to be continued...
Posted by Angie at 4:17 PM

I remember those pictures! Chris showed them to me when he first told me about you. Seems like so long ago. The first time I ever met you was the weekend before I had Jonah. :) I'll always remember meeting you right before his birth. So glad I get to have you as a sister! You're way better than dressing Chris in a tutu and calling him Christina. :)

Wth, continued? When? I want to hear now! Very sweet story. I remember him coming home and telling me the teacher he was working with was 'hot'.

Ah hah~! Was this the night we met up with you guys at the "new" lunchpaper? (which doesn't exist anymore)
I remember thinking that Chris was very quiet, especially for you. Then my mom and I ran into him at the Goodwill and he was buying books for his classroom. I could not adore him more and I think he is the perfect match for you.

In The Pursuit of Education said...

Yay! I love this story! Happy endings are great! Can't wait to see what happens next! ;)